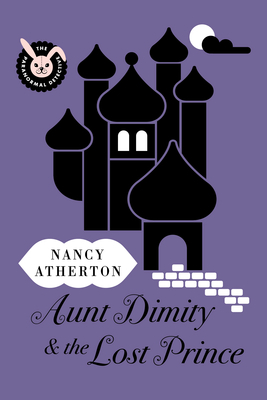 Summary:
Lori Shepherd and her neighbor Bree Pym spend a week chasing around the countryside near Finch, Lori's sort-of idyllic English village, looking for a Russian Prince from a story told by a child.  As usual, Lori gets  a little help and guidance from her "aunt" Dimity Westwood, who never let a little thing like being dead keep her from helping her best friend's daughter cope with life.  Oddly, Lori seems much more concerned with the unlikely prince than with the disappearance of the child and her mother.  Maybe there's nothing she could do about that, but she could at least try!

Recipe for Russian tea-cakes at the end of the book.

Review (sort of spoiler-ish):
I got lucky and scored a basically brand-new copy of the latest by Nancy Atherton at our library fundraiser book sale.  Aunt Dimity is one of my almost embarrassing little indulgences--cozy mysteries so cozy they verge on the saccharine.  In fact, I have to say that this time we've tipped over the edge.  Atherton seems to share a problem I sometimes have when writing: she just hates to make anyone really a villain.  But a mystery where everyone turns out actually to be nice?  Well, I don't think this is the first time, but she goes too far with that.

Frankly, I found the premise of this book unconvincing, and the characters rather one-dimensional, though it was fun to discover what each suspect in turn was really like.  And there's no denying the book is a fun romp, but it lacks that tiny hint of an edge that even a Cozy needs to qualify as a mystery.   The only part of this book that offered a real edge was the missing child, and that thread is left in the dust.

Was it still fun to read?  Yeah.  But not as fun as it should have been.  Aunt Dimity has had better adventures.

Recommendation: for die-hard Aunt Dimity fans, and those who like their books excessively sweet.

Full disclosure: I purchased this book second-hand at a library fund-raiser and received nothing from the author or the publisher for this review, which they probably won't like anyway.  The opinions expressed herein are my own and those of no one else, unless someone happens to agree with me.
Posted by Rebecca M. Douglass at 6:00 AM