Mystery Monday: Speaking From Among the Bones 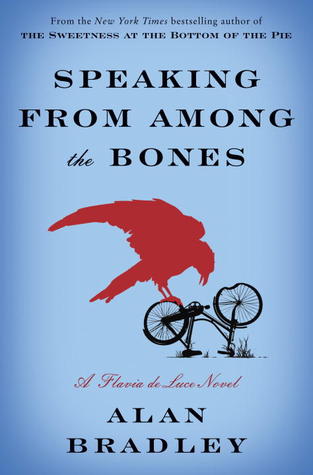 Summary:
Eleven-year-old (or is she 12 now?  If not quite, very soon to be) Flavia du Luce is eagerly present for the opening of the ancient tomb of St. Tancred, in the local church of that name.  When the body of the missing church organist appears in the upper part of the crypt, Flavia is at once hot on the trail of the killer.  Accompanied by Gladys, her faithful bicycle, Flavia uncovers more village secrets than expected, and rides into the heart of trouble, as always.

Review:
After some disappointment with the lack of development and understanding of the familial relationship in Flavia's last outing, I am happy to report that the story in this case not only comprises an intriguing mystery (which I did NOT unravel in advance of Flavia, though to be honest that seldom happens, especially with audio books, where too much is apt to slip past me for cleverness), but also a more convincing level of complexity in the relationships.  In fact, I found the story very enjoyable right up to the end, where we are left hanging a bit more than I'd like about the future of the family.

Flavia narrates the story with her customary zest, ego, and firm conviction that she can see through to the answer better than anyone.  There are a few places where I either missed leaps to some understanding (due again to the hazards of listening while doing other things), or they were not adequately explained.  I unfortunately can't actually say where the fault lies when I don't quite follow from point A to point B on an audio book.

Although Flavia is only 11 (or maybe 12--I really should have been listening more carefully), these books are not for children.  She being an innocent (sort of) from 1950-something, there is essentially nothing of sex, but plenty of other darker passions, all given us with just enough humor and style that I enjoy them very much (but wouldn't give the book to a child).  I'm not sure I'd say that Flavia is a wholly believable child (MUCH too smart and too good at chemistry etc. for her age, though she is far from a know-it-all in every area, leaning heavily on her sisters for history, etc., and only now beginning to see through their claims that she's a foundling or changeling, and no child of their dead mother), but that really isn't the point.  She's interesting.

The reader: Ms. Entwistle seems to me to voice Flavia very well indeed, and conveys very well the girl's ghoulish delight in all things morbid and/or chemical.  She puts over a sense of the girl's youth without being annoyingly childish.

This isn't the best mystery I've read, but it may be the best in the series so far.


Full disclosure: I borrowed this audio-book from the digital  library and received nothing from the author or the publisher for this review.  The opinions expressed herein are my own and those of no one else.
Posted by Rebecca M. Douglass at 6:00 AM