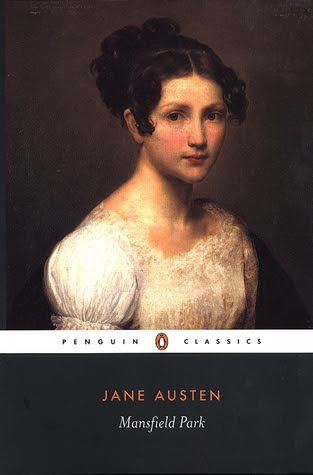 Summary: Fanny Price, oldest daughter of a woman who has married unwisely and had too many children, is sent to live with and be raised by her aunt and uncle, wealthy and noble, at Mansfield Park.  Fanny is shy, quiet, and not very strong and healthy, and is more or less ignored or imposed on by everyone at Mansfield except her cousin Edmund.  As they grow into adulthood, the usual assortment of trials and romances carry off the girl cousins, Maria and Julia.  Fanny herself is courted by an extremely "eligible" party, but is unable to accept his proposal, both because she considers him morally unstable and because she is, of course, in love with Edmund (who is, also of course, trying very hard to marry someone else).  In the end, things work out about as you'd expect, this being Austen.

Review: This doesn't feel quite like the Austen of Pride and Prejudice.  I will leave it to the scholars to debate the more serious issues of change and stability she may have been addressing, and consider the book solely from the perspective of the reader looking for entertainment.  While I missed the more obvious humor and general lightness of P & P, I did find Mansfield Park worth reading, and even stayed up past my bedtime to finish.

Although Fanny could be merely a pathetic creature--too sickly and humble to assert herself--she manages to be more than that.  Austen doesn't work on us to feel bad for the way she is used or raised (always to be second to the actual daughters of the house, though not precisely the "poor cousin" who is treated as a hired companion, either).  Instead, the reader recognizes that somehow, out of all this, she has developed an understanding of human nature (her own and others') that far exceeds that of the other characters in the novel.  This gives her, and us, an interesting view of the society in which she moves, though I'm left wondering how she manages to develop this.  Maybe it comes of always being an observer, rather than a participant.

As always, Austen writes with a delightful precision and clarity that makes reading a pleasure.  I did find myself at times wanting to tell Fanny to grow a spine, but in the end she proves that, though she's a frustratingly feeble creature in a literal sense, she has plenty of backbone metaphorically speaking.  My main complaint is that Austen seemed to rather punt at the end of the novel.  I was reading eagerly on for the big romantic scene, and instead in the end, she tells us what happened, rather than showing it, summing up some to me crucial changes in people's attitudes to Fanny in a few pages of reporting, without ever showing anyone actually behaving in the new ways.  Coming at the end of a novel as good as this, I admit to disappointment.

Critics can argue (and will, ad infinitem if not ad nauseum)  that this is Austen's most substantive and meaningful novel.  I will say that it is not, however, her most enjoyable (perhaps because of the substance and meaning she was trying to put into it?).  Worth reading?  Yes.  As much fun as Pride and Prejudice or Sense and Sensibility? No.


Full Disclosure: I checked out this copy of Mansfield Park from my library and received nothing whatsoever from the author or publisher in exchange for my honest review.  The opinions expressed in this review are my own and no one else's.
Posted by Rebecca M. Douglass at 6:00 AM