Mystery Monday: I Am Half Sick of Shadows 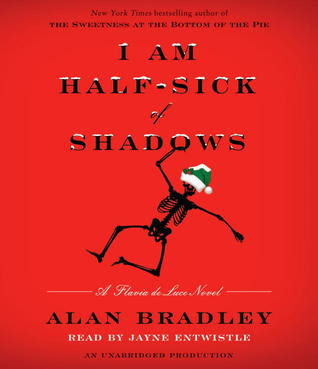 I Am Half-Sick of Shadows: A Flavia du Luce Novel, by Alan Bradley

This is book 4 of the Flavia du Luce series, all of which I have "read" as audio books, which is undeniably a different experience from reading for oneself.  Ms. Entwistle does an excellent job with the reading, and the books come to life in my mind as I listen.

Alan Bradley's Flavia du Luce books are a fairly atypical series, in that they are definitely adult murder mysteries, narrated by an 11-year-old girl.  Don't let the narrator's age fool you.  These are not children's books (though clean enough, they are sophisticated and occasionally violent).  Flavia lives at Buckshaw, a decaying English country house, in the 1950s, with her father and two older sisters who I hope are even nastier to her than real girls would be to a sister several years younger than they, a sort of general man-servant named Dogger, and Mrs. Mullet, the cook.  Flavia's mother is dead, which is sort of a necessary aspect of stories of very precocious children who do un-childlike things, but Bradley keeps that, too, a bit unconventional by having her be dead of a mountaineering accident.

Flavia is an accomplished chemist who uses her knowledge in interesting ways (a trap for St. Nick, anyone?), as well as in incorrigible nosy-Parker who puts herself in the way of danger by being unable to stop investigating things--including a murder.  For while the entire village of Bishop's Lacey is snowed in at Buckshaw, along with a film company making a movie (because, of course, the du Luce family is out of money and is making a bit extra by renting the house the the film crew), someone turns up dead.

The mystery itself is decently constructed, and I enjoy watching Flavia unravel it (and the Inspector explain how he got to the same point by more conventional means).  But the real pleasure of the series is in the relation of people in and around Buckshaw, Flavia's chemistry experiments, and the author's use of the language.  Listening to a book makes me both more and less aware of language, and I don't usually come away with phrases to remember.  But I laughed aloud when Flavia, contemplating Mrs. Mullet's cooking, says that "my uvula was cowering behind my tonsils" (apologies if this isn't exact--that's the trouble with audio!).

If you are a fan of the English cozy mystery, I recommend this series.  This book is a decent addition to the sequence, though the closed setting is a little less fun than when we have Flavia rambling about the village and the countryside on her bicycle, Gladys.  I am also beginning to itch for more development of the issues hinted at in all the books: why do the sisters seem to have a special reason to hate Flavia?  What really happened to her mother?  Will Flavia ever turn 12?  Will Ophelia pick a suitor?  I am finding the books blending together in my head, and I think it's not that the mysteries are unoriginal, but that the characters are feeling a bit static.