What we do for fun

Sunday, along with about 3999 other people, I went out and tormented myself for hours on end.  All in the name of fun.

Yup, I participated in an organized non-competitive athletic event.  In this case, the Chico Velo Wildflower Century.  Only I'm some kind of real masochist, because, since they offered a "one-time only!" version that was 125 miles, with an extra couple of thousand feet of climbing, I just had to do it.

I did do it, too, though in the interests of full disclosure I cut one corner and ended my day with a total of "only" 122 miles.  That was, without question, the most physically difficult thing I've done, with the possible exception of childbirth (I was going to say it was worse, but recovery from the ride is proving faster than from delivery, though there are plenty of other factors in that one!).

Why do we do things like this?  I was asking myself that at several points on yesterday's ride, believe me!  I think my motives are a mix of a desire to know just how much I can do--and a feeling that if I keep pushing, I can avoid the effects of age. Plus, it truly is fun, in a sort of sick way, to push yourself to the hairy edge.


6:40 a.m.  Ready to ride.  The sun is just coming up.  I'm smiling because I had a good breakfast and haven't started climbing yet. 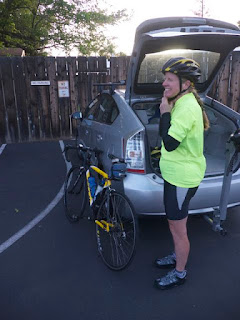 Two hours later, arriving at the first rest stop. Still smiling.  Not too hard yet. 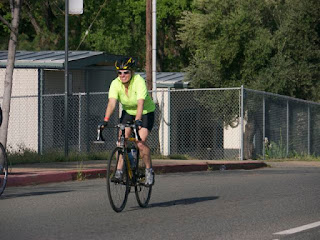 The other reason I do the long rides.  For one day, you can eat like a hobbit: often, and everything in sight. 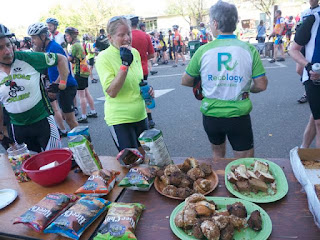 At the high point, with 80 miles to go--and one more big climb.  Smile is wearing a bit thin. 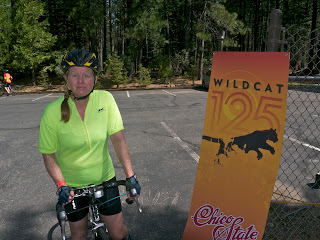 Rolling in to lunch, at mile 92 (and way past time for more food).  Mercifully, the spouse didn't take any more photos after this.  Temps were into the 80s by now, and I was feeling it pretty badly. 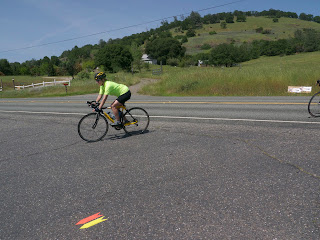