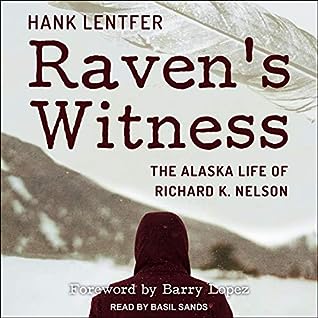 Title: Raven's Witness: The Alaska Life of Richard K. Nelson
Author: Hank Lentfer. Read by Basil Sands
Publication Info: 2020 Tantor Audio. 8:29. Original 2020 by Mountaineers Books. 256 pages.
Source: Library digital resources
Publisher’s Blurb:
Before his death in 2019, cultural anthropologist, author, and radio producer Richard K. Nelson's work focused primarily on the indigenous cultures of Alaska and, more generally, on the relationships between people and nature. Nelson lived for extended periods in Athabaskan and Alaskan Eskimo villages, experiences which inspired his earliest written works, including Hunters of the Northern Ice.
In Raven's Witness, Lentfer tells Nelson's story--from his midwestern childhood to his first experiences with Native culture in Alaska through his own lifelong passion for the land where he so belonged. Nelson was the author of the bestselling The Island Within and Heart and Blood. The recipient of multiple honorary degrees and numerous literary awards, he regularly packed auditoriums when he spoke. His depth of experience allowed him to become an intermediary between worlds. This is his story.
My Review:
I picked this book up from the library because it won kudos at the Banff Film festival, and it was at least an interesting read. First, the bad news: I hated the narrator. His delivery uses over-meaningful pauses and emphases that seem to imply significance and drama in every sentence, and it drove me nuts. I would have dumped the audiobook and gotten a text version, but the library only had the audio.
Once I got past the narration, however, the story is engaging and well-written. The narrator made me feel at first that it leaned toward purple prose, but in the end I decided that most of that was on Sands, and if read in a normal way it would be pretty decent.
I came away with a feeling that though Nelson wasn't one of those people whose life you feel everyone ought to know about, he was worth learning about anyway. His work in his later years to help slow the logging in the Tongas National Forest is laudable, but I particularly liked his insights into the lives of the native people among whom he lived for several years, and appreciated his evolution away from anthropology--which always implies a certain superiority--to an openness to simply learn from them.
Lentfer became friends with Nelson in his final years, and the friendship and respect of a younger man for an elder informs the book all through. That's not necessarily a bad thing, but consider it a warning that there isn't a very strong critical thread in this presentation of Nelson's life.
My Recommendation:
Worth reading for insights into Alaskan history and culture, and as a reminder of what has been lost to the "march of progress." But get the print book and spare yourself the audio.

FTC Disclosure: I borrowed an electronic copy of Raven's Witness from my library, and received nothing from the author or the publisher in exchange for my honest review. The opinions expressed are my own and those of no one else. I am disclosing this in accordance with the Federal Trade Commission's 16 CFR, Part 255: "Guides Concerning the Use of Endorsements and Testimonials in Advertising.”
******************************************
Meanwhile... Please consider pre-ordering your copy of my new short-story collection, Clues, Cops, & Corpses! 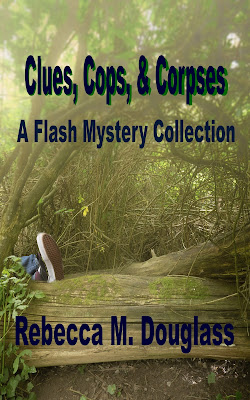