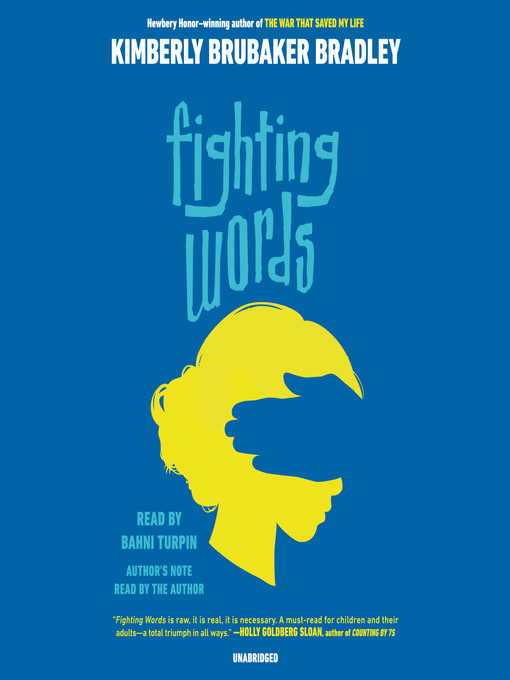 Title: Fighting Words
Author: Kimberly Brubaker Bradley. Read by Bahni Turpin
Publication Info: Random House Audio, 2020. 6 hours 35 min.
Source: Library digital resources
Publisher’s Blurb:
Ten-year-old Della has always had her older sister, Suki: When their mom went to prison, Della had Suki. When their mom's boyfriend took them in, Della had Suki. When that same boyfriend did something so awful they had to run fast, Della had Suki. Suki is Della's own wolf—her protector. But who has been protecting Suki? Della might get told off for swearing at school, but she has always known how to keep quiet where it counts. Then Suki tries to kill herself, and Della's world turns so far upside down, it feels like it's shaking her by the ankles. Maybe she's been quiet about the wrong things. Maybe it's time to be loud.
In this powerful novel that explodes the stigma around child sexual abuse and leavens an intense tale with compassion and humor, Kimberly Brubaker Bradley tells a story about two sisters, linked by love and trauma, who must find their own voices before they can find their way back to each other.
My Review:
This is a pretty raw story about some pretty awful things, but the author really has managed to keep it appropriate to middle grade readers--while giving any such readers who have this trauma in their own lives something to grab hold of. I found the narration by Ms. Turpin to be spot-on, and made me feel I was really hearing from Della.

Like others of Bradley's books (The War That Saved My Life, for example) the story will break your heart and make you angry, but there is a well-tuned blending-in of humor and little-girl thinking that kept it from being a dark story despite the hard subject matter. In the end, there is more hope than anger, which is as it should be in a children's book, I think.
On a note for those of us who write, the author's approach to dealing with Della's propensity for cussing was brilliant, if at first a little disconcerting. Readers can imagine for themselves whatever level of swearing is known but shocking to them, and get a little laugh every time the word comes up :)
My Recommendation:
A worthwhile read, and something that should be in every school library, where it may be found by the children who need to know that they are not the only ones. At the same time, I don't think that the discussion of the abuse is at all graphic enough to disturb a child who doesn't know what it's about.
FTC Disclosure: I borrowed an electronic copy of  Fighting Words from my library, and received nothing from the author or the publisher in exchange for my honest review. The opinions expressed are my own and those of no one else. I am disclosing this in accordance with the Federal Trade Commission's 16 CFR, Part 255: "Guides Concerning the Use of Endorsements and Testimonials in Advertising.”
©Rebecca M. Douglass, 2021
As always, please ask permission to use any photos or text. Link-backs appreciated.
Enjoyed this post? Avoid missing out on future posts by following us.
Posted by Rebecca M. Douglass at 12:00 AM