Audiobook Review: This Time Next Year We'll Be Laughing 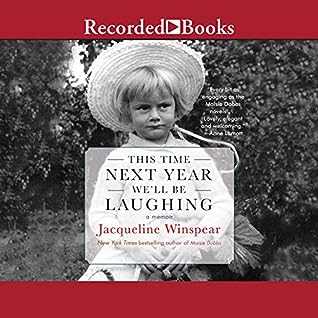 Title: This Time Next Year We'll Be Laughing: A Memoir
Author: Jacqueline Winspear. Read by the author.
Publication Info: Audible Audio, 2020; 10 hours.   Hardcover Soho Press, 2020. 303 pages.
Source: Library Digital Resources
Publisher’s Blurb:
After sixteen novels, Jacqueline Winspear has taken the bold step of turning to memoir, revealing the hardships and joys of her family history. Both shockingly frank and deftly restrained, her memoir tackles such difficult, poignant, and fascinating family memories as her paternal grandfather's shellshock, her mother's evacuation from London during the Blitz; her soft-spoken animal-loving father's torturous assignment to an explosives team during WWII; her parents’ years living with Romani Gypsies; and Jacqueline’s own childhood working on farms in rural Kent, capturing her ties to the land and her dream of being a writer at its very inception.

An eye-opening and heartfelt portrayal of a post-War England we rarely see, This Time Next Year We'll Be Laughing is the story of a childhood in the English countryside, of working class indomitability and family secrets, of artistic inspiration and the price of memory.
My Review:
Jacqueline Winspear is the author of the Maisie Dobbs mysteries, a series that began in the period right after WWI and has continued on into the Second World War. It is probably the best historical mystery series I've found. Now I know why. In addition to being a meticulous researcher, Winspear developed a real sense of what the war times were like through her own family and the stories they told.
Not exactly the story I expected for the author's life, the tale she gives us here is gripping, compelling, and (no surprise) very well written. Her reading of the memoir is also fantastic, so that I felt rather as though I had her in my living room telling me the story of her childhood. And, as with a conversation, the book twists and doubles back in places, picking up a thread as though she just remembered another thing. Nonetheless, the overall arc is from the beginning to her departure to the US as a young woman ready to start a career as a writer, and the progression is spot on.
Winspear is only a few years older than I am. I often feel like I grew up in an earlier era than I did (thanks to some formative years in a place that wasn't really in step with the times), but her childhood feels like something from a much earlier period still, in ways that are fascinating to this child of the American West.
My Recommendation:
I can recommend this not only for fans of Ms. Winspear's novels, but also for anyone interested in a well-written memoir of an unusual childhood. I have to recommend the audio book, because while there may be pictures and things in the print book (I don't know. Are there?), her reading of the book is not to be missed.
Posted by Rebecca M. Douglass at 12:00 AM