In February 2020--remember those days when we could still travel and move about?--my husband, brother-in-law, and I traveled through Patagonia. I'm starting to be able to go through those photos again and share some. I have used more of my husband's photos than I have in the past, in part because they are better than mine, and in part so that his talent can be shared.

One of our early stops on an 11-day, 1600-mile road trip on both sides of the Chile-Argentina border, was the Cueva de Las Manos (Cave of the Hands), a UNESCO World Heritage Site established in 1999. In a canyon carved by the Rio Pinturas into the basalt, a lengthy section of overhang (not really a cave) is covered with thousands of pictographs, primarily the silhouettes of hands.

The drive down Argentina's Ruta 40 over the Patagonia steppe felt a lot like driving minor backroads through the US Southwest. At least it, unlike the 17-miles road to the cave, was mostly paved (though we learned to read at least three different kinds of sign warning of potholes, some of them bad enough to require slowing to dirt-road speeds). 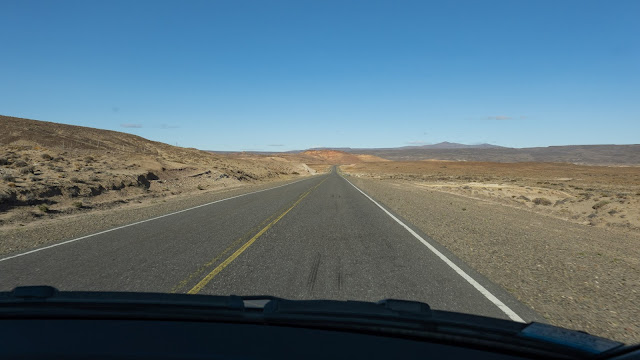 The tip-off that we weren't in Utah (besides highway signs in Spanish) was the fauna.

At the end of the dirt road lay a visitor's center and a staff of multi-lingual guides to interpret and protect the site. We were the first visitors that morning and had a guide to ourselves. She had been an archaeology student before leaving university to work full-time at the Cueva de las Manos, and had just enough English to get the job done. She led us off down the roughly 1-mile trail to the cave, which is high on the banks about the line of green marking the Rio Pintura.

As I have found with ancient rock art throughout the Colorado Plateau and beyond, it is humbling and moving to be in the presence of such ancient works of personal expression.

Like any wise travelers to such remote sites, we came prepared, and enjoyed a typical roadside lunch on the way back to the highway, in a canyon that felt very familiar and at the same time alien.