Way back in September, when we first arrived in Maine, we headed straight over to Acadia National Park so that we could attend the Night Sky Festival--a celebration of Acadia as one of the few "dark sky" places in the NE, and a chance to learn some more about astronomy, etc. We didn't fail to take advantage of being in the park, though, and we hiked and biked a lot of miles of trail in 3 days.

Lots of parts of the community of Bar Harbor come together to make the Night Sky Festival happen. The classic Criterion Theater was the site of a fantastic performance by Galileo's Daughters, with readings by Dava Sobol (author of The Glass Universe). 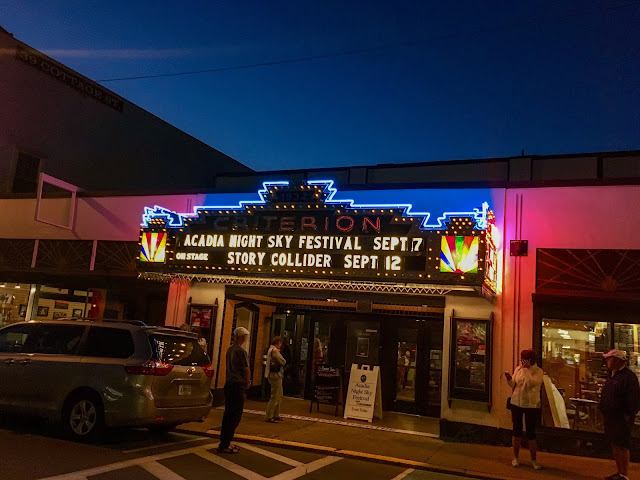 We followed that up with some star-gazing through telescopes hosted by about 30 volunteer amateur astronomers. Seeing the rings of Saturn was definitely a treat! I don't have photos of that, of course, nor of the lectures/presentations we attended on things like Mars and the sun. We also took a "night sky" cruise on the bay, which was both kind of fun, and partly just cold and a little stinky (from the diesel fumes). But the sunset was beautiful.
During the days, we engaged with the beautiful landscapes of Acadia. There are 45 miles of carriage roads in the park, open to bikes. They aren't paved, but the crushed gravel and hard-packed dirt are smooth enough even for our road bikes, though in a few places deeper gravel made for some interesting riding. We didn't ride all 45 miles, but we did cover about 20 miles.
The carriage roads aren't all flat, though the grades are pretty easy. The carriage road system was built from the 1920s to the 40s, financed by John D. Rockefeller, to allow early visitors to see the park peacefully--by foot, horse, carriage or bicycle, but never by motorized vehicle. They are distinct from the trails, as we will see! 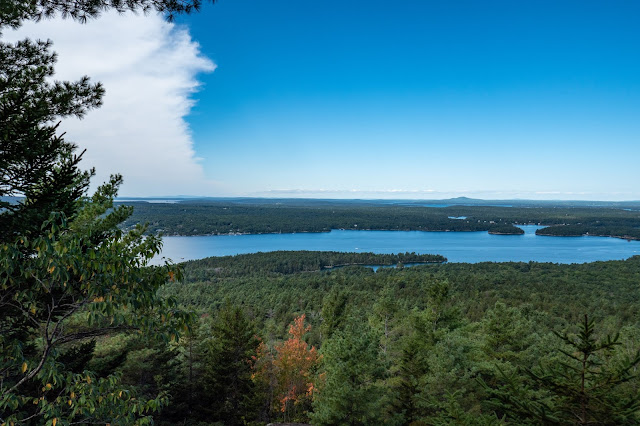 You can still see the island by wagon, if you want to pay for the opportunity. We stuck to our "iron steeds."
We would have liked to bike up Cadillac Mountain, but time and good sense argued against it. We drove up for a quick dinner before our cruise.
As said, we also hiked some trails that bore little resemblance to the carriage roads. Being adventurous, we just *had* to tackle the one labelled "Precipice Trail." Warning signs, in our experience, are always exaggerated, as the parks work hard to protect themselves and their visitors. 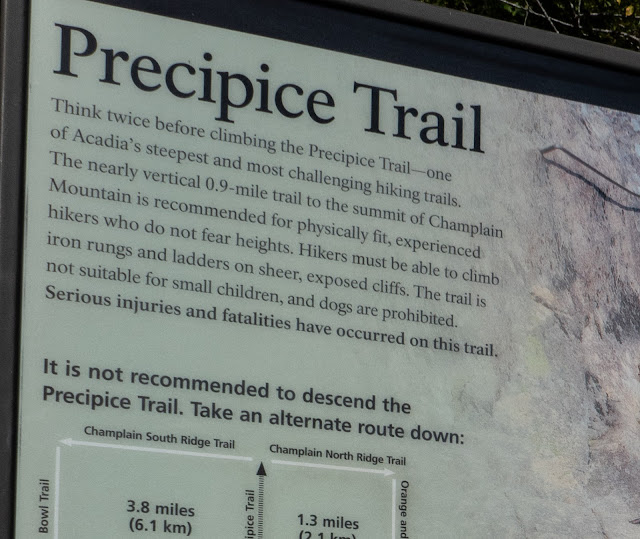 We soon found that this might be one time when the signs spoke the absolute truth.

By the time we got to this part, it looked like a super-highway. Happily, though I don't like edges, I was fine with all the rails and rungs to hold onto. I consider the trail something like a jungle-gym for grown-ups, though I certainly agreed with the recommendation not to try to climb down! 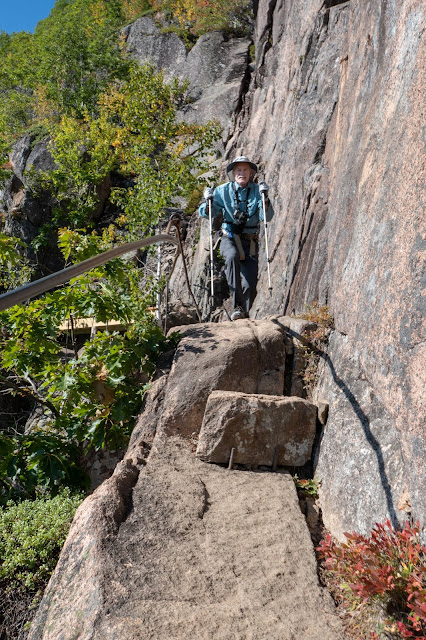 We made a nice loop over the mountain.
The best part about our visit? Despite the Festival bringing a few extra people to the area, perhaps, the crowds of summer were gone--and so were the infamous black flies! No bugs, no crowds, though there were also no last-minute sites available in the Park campground. We found a place just outside Bar Harbor, though, which was actually more convenient to the Festival events, which mostly took place in town. The park doesn't quite feel like our large western wilderness parks, but it's worth a visit--and the Precipice Trail is worthy of any park! 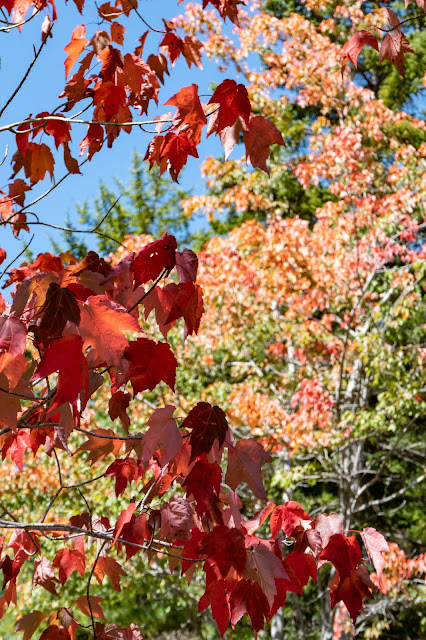 ©Rebecca M. Douglass, 2018
As always, please ask permission to use any photos or text. Link-backs appreciated.