The Ninja Librarian is back in civilization! Well, more or less. We have arrived in Maine, and I have a reliable internet connection, so I’m expecting to get back to regular posting soon. I haven’t been reading or writing much the last few weeks. That’s no surprise, since we were driving across the country, with various stops for hikes and bike rides. We did listen to a couple of good audio books (those are a life-saver when you are driving across eastern Montana, North Dakota, and Minnesota, though there are parts of all of those that are gorgeous).

During that time, of course, there wasn’t any writing going on, but I have been thinking about the new Pismawallops PTA book, which at this point has a title (Death By Library), a corpse, and a list of suspects. I’m ready to get serious about the plot and outline, and intend to do a draft during the NaNo frenzy in November.

Meanwhile, I’ll have more photos soon, with highlights from Teddy Roosevelt National Park, places along Lake Superior, and Acadia National Park. For now, here are just a few from my phone (I need to get the computer set up so I can download and edit the real photos).

We carry our camp kit wherever we go, so we can fix dinner whenever it's convenient. You don't often get a kitchen stove with a view like this.
Somewhere out in eastern North Dakota we realized that the overcast wasn't solid. These are "cloud streets," properly called horizontal convective rolls. They form from just the right combination of convection and wind, but more than that I can't say :) 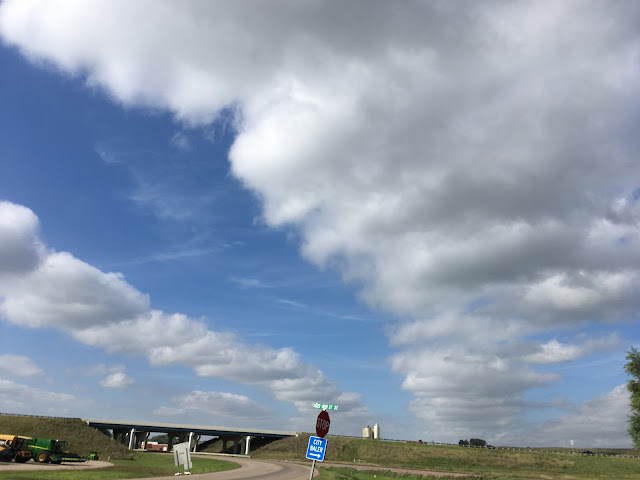 On to Minnesota, where we encountered Paul Bunyan on the side of the road.
On to Michigan and Lake Superior! I did take a dip in the lake, which wasn't a bad temperature close in to shore, though I gather the overall average temp is colder than Puget Sound, so I wouldn't want to swim far!
After some time in Algonquin Provencial Park and a night with friends in Montreal, we finally reached Maine, some 18 days after leaving our home in California for the last time.
We spent our first weekend in Maine at Acadia National Park (and I hope that may be about the last time we go out on a weekend) to take in the Acadia Night Sky Festival #AcadiaNightSky. We mixed hiking, biking, and educational events, but the phone didn't go on that many of the outings.

Our first night there we saw an amazing live music/multi-media show with Dava Sobel and Galileo's Daughters, "Perpetual Motion: Galileo and his Revolutions."
We followed the performance with star viewing through telescopes (Acadia is celebrating being one of the few dark places on the eastern seaboard, so on a moonless night the viewing is very good, though I've seen much clearer and darker skies out west), scopes and assistance provided by about 30 amateur astronomers. I was delighted to find that someone had donated a good scope to the local high school, and a couple of enthusiastic and competent young women were running it. Seeing the rings of Saturn with my own eyes was pretty special.

Our second night we took a star-gazing cruise. That was kind of fun, and we learned some, but it wasn't as worthwhile as the previous night's combo, though the sunset was beautiful. We did a fantastic hike on Sunday morning, climbing the aptly named Precipice Trail, before heading back to our Maine home.
That's all I have for you today! I'd like to think I'll manage some very short fiction for Friday. We'll see!


©Rebecca M. Douglass, 2018
As always, please ask permission to use any photos or text. Link-backs appreciated