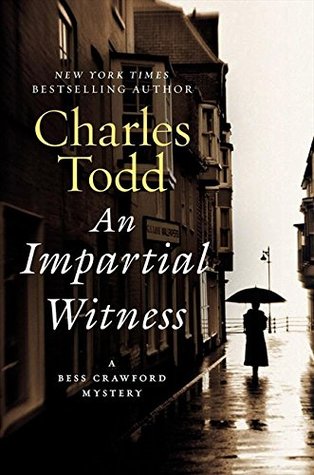 
Publisher's Blurb:
It is early summer 1917. Bess Crawford has returned to England from the trenches of France with a convoy of severely wounded men. One of her patients is a young pilot who has been burned beyond recognition, and who clings to life and the photo of his wife pinned to his tunic.

While passing through a London train station, Bess notices a woman bidding an emotional farewell to an officer, her grief heart-wrenching. And then Bess realizes that she seems familiar. In fact, she's the woman in the pilot's photo, but the man she is seeing off is not her husband.

Back on duty in France, Bess discovers a newspaper with a drawing of the woman's face on the front page. Accompanying the drawing is a plea from Scotland Yard seeking information from anyone who has seen her. For it appears that the woman was murdered on the very day Bess encountered her at the station.

Granted leave to speak with Scotland Yard, Bess becomes entangled in the case. Though an arrest is made, she must delve into the depths of her very soul to decide if the police will hang an innocent man or a vicious killer. Exposing the truth is dangerous—and will put her own life on the line.

My Review:
This is a good series I discovered last year and meant to get back to sooner. The WWI setting is one that particularly interests me, and the author does a good job of evoking it realistically. That realism includes striking a delicate balance between Bess's independence of thought and action and the realities of her life as a woman and nurse in that era. The writing is strong and characters well-drawn.

The mystery is well-plotted. I ran through several perps before lighting on the correct one about the same time Bess did. I thought it was particularly good that although she is determined to find the "real killer," she never lets go of the recognition that the man arrested might, in fact, be a killer. She just isn't quite sure enough to let matters rest. I appreciated that she is neither blindly believing nor feeling psychic. She's mostly being rational, and determined to see justice done, and not blind to the influence of her own feelings in that determination. I think Bess is a strong sleuth, with a good supporting cast who may have a tendency to step in a little too often. I kind of want her to do it all herself, but the author has been more realistic.

My Recommendation:
A series and a writer well worth checking out (I'm currently reading the first book in Charles Todd's other series from roughly the same era, the Inspector Ian Rutledge books. I'll report out on that when I finish). This isn't exactly a cozy mystery, but it's not hard-boiled, either. If you like Jacqueline Winspear's Maisie Dobbs, this is almost sure to be a hit.

FTC Disclosure: I checked An Impartial Witness out of my library, and received nothing from the writer or publisher for my honest review. The opinions expressed are my own and those of no one else. I am disclosing this in accordance with the Federal Trade Commission's 16 CFR, Part 255: "Guides Concerning the Use of Endorsements and Testimonials in Advertising."
Posted by Rebecca M. Douglass at 12:00 AM