Middle Grade Monday: Stepping on the Cracks. An Audio-book Review. 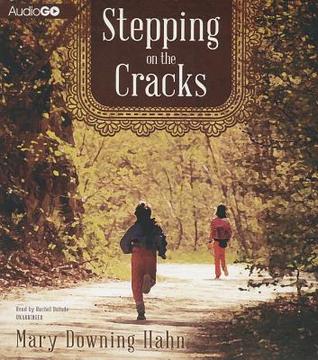 Publisher's Summary:
Margaret and her best friend Elizabeth both have brothers fighting the war against Hitler; like everyone else they know, they are filled with feelings of patriotism. Margaret and Elizabeth support everything about the war: the troops, the reasons for going to war, even the food rations. After all, this is the good war and the Americans are the good guys.

But the girls are also involved in their own personal war at home. Gordy Smith, the worst bully in the sixth grade, teases and torments them, and Margaret is scared to death of him. But when Gordy and his pals Toad and Doug grow bolder than ever, Margaret and Elizabeth come up with a daring plan to get even. That’s when the girls discover a shocking secret about Gordy that turns their lives upside-down and draws them into a startling confrontation with family, friends, and their own strongly held ideas.

My Review:
Though it is in many ways a typical kid's book about the WWII era (younger sister at home, older brother off in the army, everyone stressed), this book takes some interesting turns and saved itself from being so-so by delving into several less obvious issues. (This no doubt explains why it got about half a dozen awards). Questions of courage and cowardice come up repeatedly, as does to what extent a child can make adult decisions. Likewise, we can watch while Margaret discovers that adults aren't always right, and don't always even know what's right.

The events that unfold over the 8 or 9 months of the story lead Margaret to see that she does not always have to agree with her parents, and she begins to question many things that they have taken for granted (including the right of a husband and father to "discipline" his family as he sees fit). I think it is for these things that the book received the awards, as the author doesn't take the common path of having the child grow up enough to see that her parents are right. In this case, she grows up enough to see that her parents may well be wrong.

The audio book is well-produced, and the narration is good, with characters voiced distinctly and appropriately.

My Recommendation:
A good read for upper-elementary (11-12) kids ready to consider some difficult issues, including the fallibility of parents. Listening to the audio with your child might provide some chances for discussion.

FTC Disclosure: I checked Stepping on the Cracks out of my library, and received nothing from the writer or publisher for my honest review.  The opinions expressed are my own and those of no one else.  I am disclosing this in accordance with the Federal Trade Commission's 16 CFR, Part 255: "Guides Concerning the Use of Endorsements and Testimonials in Advertising."
Posted by Rebecca M. Douglass at 12:00 AM