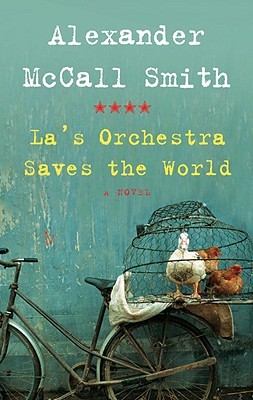 
Publisher's Summary:
It is 1939. Lavender—La to her friends—decides to flee London, not only to avoid German bombs but also to escape the memories of her shattered marriage. The peace and solitude of the small town she settles in are therapeutic . . . at least at first. As the war drags on, La is in need of some diversion and wants to boost the town's morale, so she organizes an amateur orchestra, drawing musicians from the village and the local RAF base. Among the strays she corrals is Feliks, a shy, proper Polish refugee who becomes her prized recruit—and the object of feelings she thought she'd put away forever.

My Review:
With his fantastic #1 Ladies' Detective Agency series, as well as the bitingly funny Portuguese Irregular Verbs books, Alexander McCall Smith doesn't really need me to tell the world that he writes good books. But here I am anyway.

There is nothing huge and earth-shattering in this book. And that's just the point. La and her orchestra save the world by providing normalcy, and a sense that the small things are more than worthwhile--they might be essential. They might be the things that save the world.

It's not that La or her village are particularly special, or that everything is sweetness and light. There are some not-so-nice people, but the drama is muted, leaving a story that is just a quiet pleasure to read.

My Recommendation:
Check it out. This feels less to me like any of the author's series, and more like his My Italian Bulldozer, which I read in May but apparently failed to review, even though I swear I remember writing about it...wonder where that was? Anyway, both are sweet books with a bit of humor and an understated love story (way understated, in fact). Great reads for disturbing times.

FTC Disclosure: I checked La's Orchestra Saves the World out of my library, and received nothing from the writer or publisher for my honest review.  The opinions expressed are my own and those of no one else.  I am disclosing this in accordance with the Federal Trade Commission's 16 CFR, Part 255: "Guides Concerning the Use of Endorsements and Testimonials in Advertising."
Posted by Rebecca M. Douglass at 12:00 AM