Middle Grade Monday: The Odds of Getting Even (Audio Book review) 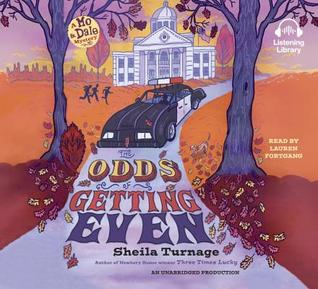 Title: The Odds of Getting Even
Author: Sheila Turnage; read by Lauren Fortgang
Publisher: Listening Library, 2015. Original 2015 by Kathy Dawson Books, 352 pages.
Source: Library digital resources
This is the 3rd mystery in the Tupelo Landing series. I reviewed the first, Three Times Lucky, in March of 2013. The second is The Ghosts of Tupelo Landing, which I read in 2014.

Publisher's Summary:
The trial of the century has come to Tupelo Landing, NC. Mo and Dale, aka Desperado Detectives, head to court as star witnesses against Dale's daddy--confessed kidnapper Macon Johnson. Dale's nerves are jangled, but Mo, who doesn't mind getting even with Mr. Macon for hurting her loved ones, looks forward to a slam dunk conviction--if everything goes as expected.

Of course nothing goes as expected. Macon Johnson sees to that. In no time flat, Macon's on the run, Tupelo Landing's in lockdown, and Dale's brother's life hangs in the balance. With Harm Crenshaw, newly appointed intern, Desperado Detectives are on the case. But it means they have to take on a tough client--one they'd never want in a million years.

For everyone who's already fallen for Mo and Dale, and for anyone who's new to Tupelo Landing, The Odds of Getting Even is a heartwarming story that perfectly blends mystery and action with more serious themes about family and fathers, all without ever losing its sense of humor.

My Review:
Even though I couldn't find my review of the second book in this series (Ghosts of Tupelo Landing), I read it and have enjoyed all three books. As a mystery, this plays very well. There are plenty of suspects, and lots of clues. If I got to the culprit faster than the kids did, I think that was intentional to some degree--a middle grade mystery should allow a middle grade reader some chance of solving the crime. But once again there is a nice balance of excitement, clues to follow, adventure, and some serious themes about family.

I like that the techy math kids are girls, one of whom solves a code for Mo and Dale and breaks the case open (she is also a shrewd buisnesswoman who makes sure she gets appropriate payment for that service). But I also like the way in which Dale, ever the academic flop of the group, is shown to be plenty smart.

The writing is strong, the characters wonderfully developed where they should be, and entertainingly modified from "stock" characters where that's appropriate (the little old southern lady with a steel core...), and the story nicely paced. The narration by Lauren Fortgang is beautifully done, making it a joy to listen to the story.

My Recommendation:
Ms. Turnage has added another strong work to the options for middle grade readers. I'd recommend reading the series in order: though I think the book can stand on it's own it might kind of spoil things for the books that go before, and some things will make more sense with some background. I think it speaks well for the series that even though it's been 4 1/2 years since I read the first one, I remembered enough to make sense of things right off. Still, I might go back and re-read, just to enjoy a good yarn. Really, the biggest question I have is how, since this came out 2 years ago, I missed it until now (and is there another one yet?).

FTC Disclosure: I checked The Odds of Getting Even out of my library, and received nothing from the writer or publisher for my honest review.  The opinions expressed are my own and those of no one else.  I am disclosing this in accordance with the Federal Trade Commission's 16 CFR, Part 255: "Guides Concerning the Use of Endorsements and Testimonials in Advertising."
Posted by Rebecca M. Douglass at 12:00 AM