Oh, bother. It's summer time and I'm losing track. I see that today is the IWSG posts day (now). So here's a quick nod of the head to the IWSG.

Posting: The first Wednesday of every month is officially Insecure Writer’s Support Group day. Post your thoughts on your own blog. Talk about your doubts and the fears you have conquered. Discuss your struggles and triumphs. Offer a word of encouragement for others who are struggling. Visit others in the group (click on the badge above for the list) and connect with your fellow writers - aim for a dozen new people each time - and return comments. This group is all about connecting!
This month's question is: What valuable lessons have you learned since you started writing?
If I were to answer this one fully, it could be a very long list, even if we only count starting from when I published my first book. I'll just hit a couple of high points and hope that my readers will chime in with their own experiences!
1. If you want to write like a pro, treat it like a job. I don't mean sit in a cubicle and let your word processor suck all the life from you, but do expect to show up to work every day (or most days), and to hit some targets and goals.
2. Don't beat yourself up when life gets in the way and you can't write. Okay, not only does this sound like the opposite of the first item, but I'm still working on it. The thing is, if you *aren't* making a living at writing, odds are that there are other things in your life that sometimes have to take precedence. The struggle is to figure out which are real and what's an excuse, and find that eternally delicate balance.
3. Have fun. I'm not making piles of money writing. So if it stops giving me a return on investment in the form of joy, it's time to quit writing and go hiking.
What are your lessons? Leave a comment below, after checking out my review of the day! 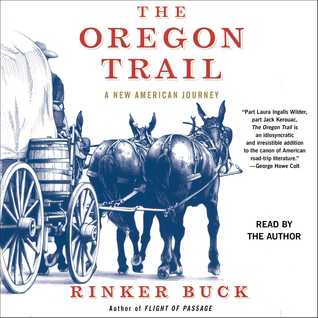 Publisher's Summary:In the bestselling tradition of Bill Bryson and Tony Horwitz, Rinker Buck's "The Oregon Trail" is a major work of participatory history: an epic account of traveling the 2,000-mile length of the Oregon Trail the old-fashioned way, in a covered wagon with a team of mules--which hasn't been done in a century--that also tells the rich history of the trail, the people who made the migration, and its significance to the country.

Spanning 2,000 miles and traversing six states from Missouri to the Pacific Ocean, the Oregon Trail is the route that made America. In the fifteen years before the Civil War, when 400,000 pioneers used it to emigrate West--historians still regard this as the largest land migration of all time--the trail united the coasts, doubled the size of the country, and laid the groundwork for the railroads. The trail years also solidified the American character: our plucky determination in the face of adversity, our impetuous cycle of financial bubbles and busts, the fractious clash of ethnic populations competing for the same jobs and space. Today, amazingly, the trail is all but forgotten.

Rinker Buck is no stranger to grand adventures. "The New Yorker "described his first travel narrative, "Flight of Passage," as "a funny, cocky gem of a book," and with "The Oregon Trail "he seeks to bring the most important road in American history back to life. At once a majestic American journey, a significant work of history, and a personal saga reminiscent of bestsellers by Bill Bryson and Cheryl Strayed, the book tells the story of Buck's 2,000-mile expedition across the plains with tremendous humor and heart. He was accompanied by three cantankerous mules, his boisterous brother, Nick, and an "incurably filthy" Jack Russell terrier named Olive Oyl. Along the way, Buck dodges thunderstorms in Nebraska, chases his runaway mules across miles of Wyoming plains, scouts more than five hundred miles of nearly vanished trail on foot, crosses the Rockies, makes desperate fifty-mile forced marches for water, and repairs so many broken wheels and axels that he nearly reinvents the art of wagon travel itself. Apart from charting his own geographical and emotional adventure, Buck introduces readers to the evangelists, shysters, natives, trailblazers, and everyday dreamers who were among the first of the pioneers to make the journey west. With a rare narrative power, a refreshing candor about his own weakness and mistakes, and an extremely attractive obsession for history and travel, "The Oregon Trail" draws readers into the journey of a lifetime.


My Review:
My reaction to this book, in a nutshell: it's an interesting story, well told. Of course, the settlement of the American west and the Oregon trail is one of my particular areas of historical interest (and for attentive and wondering readers, yes, there are quite of few of those areas of interest for me), so I welcomed a chance to read a new account of crossing the trail, even if the trail and the conditions aren't exactly what they were in 1850.

One interesting aspect was that in many places, Buck and his brother found the trail much less populated than it was for many of those who crossed more than a century earlier. Not only were large areas that had once been homesteaded every few miles now converted to huge industrial farms, but of course they were not traveling with a wagon train. When something went wrong, they had no one to lean on but themselves, at least until they could get cell reception. That latter was a help, but not the cure-all many people might think. When things went wrong, they usually had to cope with emergency measures on the spot, even if they were able to call in help later. Wagon parts seldom seemed to break in places with cell reception.

The historical information provided was interesting and fairly well integrated with their own story, and included details about things that I never encountered in any of the Trail journals I've read (exactly how a wagon is built, and the challenges of handling mules, or the incredible discomfort of sitting on the seat of a wagon without suspension). Equally enjoyable, and perhaps also of value when thinking about the historical crossings, was the development of the relationship between the brothers. Both grew and were made stronger as the trip went on, and their relationship seemed to deepen as each learned respect for the strengths of the other. Those strengths were decidedly complementary, which meant that at times they butted heads pretty hard.

I had to laugh a little over some things, as when Buck admitted to eating canned chili nearly every night, because they were too tired to cook. I couldn't help thinking about the women and girls who crossed the trail, walking and riding (which sound about equally fatiguing) in absurd skirts, then climbed down and built a fire and cooked up a meal from scratch every night. Granted, the larger group helped and meant they weren't usually also caring for the stock, but still. The weaker sex my hind-quarters.

About the audio: the book was read by the author, which was kind of cool, but his reading wasn't up to the standards of the best readers. Hesitations put commas where they didn't belong, and forced me to think twice to follow the meaning in places. On the other hand, it gave an authenticity no disinterested reader could have provided, and I wouldn't have missed his imitations of his brother's tones and language. A real bonus was a conversation between the brothers appended to the book. I did note that not everything they said there matched what Rinker Buck said in the book exactly, but the impact of the journey on the men and on their relationship was really clear in that conversation.

My Recommendation:
Definitely worthwhile for anyone at all interested in the subject. I will note that after listening to the book, I ordered the hardback from the library in order to see the pictures and the maps. In particular, I needed some illustrations to understand how they did the 3-mule driving rig. So I would recommend, if at all possible, that you both listen to this one AND get the print edition, though there are a limited number of illustrations (wish one of them had been an avid photographer). And maybe plan on using Google Maps a lot to get more detail on the route, if you are as obsessive as I am about such.

FTC Disclosure: I checked The Oregon Trail: A New American Journey out of my library, and received nothing from the writer or publisher for my honest review.  The opinions expressed are my own and those of no one else.  I am disclosing this in accordance with the Federal Trade Commission's 16 CFR, Part 255: "Guides Concerning the Use of Endorsements and Testimonials in Advertising."