Audiobook Review: Murder in an Irish Village, by Carlene O'Connor 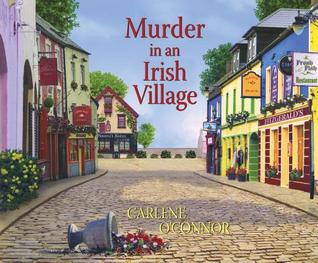 Publisher's Summary:In the small village of Kilbane, County Cork, Ireland, Natalie's Bistro has always been warm and welcoming. Nowadays twenty-two-year-old Siobhan O'Sullivan runs the family bistro named for her mother, along with her five siblings, after the death of their parents in a car crash almost a year ago. It's been a rough year for the O'Sullivans, but it's about to get rougher. One morning, as they're opening the bistro, they discover a man seated at a table with a pair of hot pink barber scissors protruding from his chest. With the local garda suspecting the O'Sullivans, and their business in danger of being shunned. It's up to feisty redheaded Siobhán to solve the crime and save her beloved brood.

My Review:
An altogether satisfying mystery! Maybe it just hit the right tone at the right time, but I thought the story and characters were interesting, the mystery was intriguing and not so easy to see through, and there were just the right amounts of excitement and romance (which is to say, a final scene that raised the heart rate a bit, and romance kept to the very mild and second or probably third tier of importance to the story).

Probably the only complaint I could make would be the usual one of motivation and justification for the amateur sleuth, and in all honesty, this was much less of an issue than with most cozies. Every time I began to think Siobhán should just go to the police and let it go, the author ramped up her personal investment, and gave Siobhán reasons why she couldn't wait for the slower-moving wheels of justice to grind.

The interactions of the people of the village are a large part of what makes this sort of book interesting, and I thought O'Connor did a great job of making the people interesting, quirky, and a human mix of good and bad. There were no stereotypes, except maybe the evil landlady.

Caroline Lennon does a great job with the reading, and has a delightful voice and accent to listen to.

My Recommendation:
This is definitely a series and an author to watch, and to read more of.

FTC Disclosure: I checked Murder in an Irish Village out of my on-line library, and received nothing from the writer or publisher for my honest review.  The opinions expressed are my own and those of no one else.  I am disclosing this in accordance with the Federal Trade Commission's 16 CFR, Part 255: "Guides Concerning the Use of Endorsements and Testimonials in Advertising."
Posted by Rebecca M. Douglass at 12:00 AM