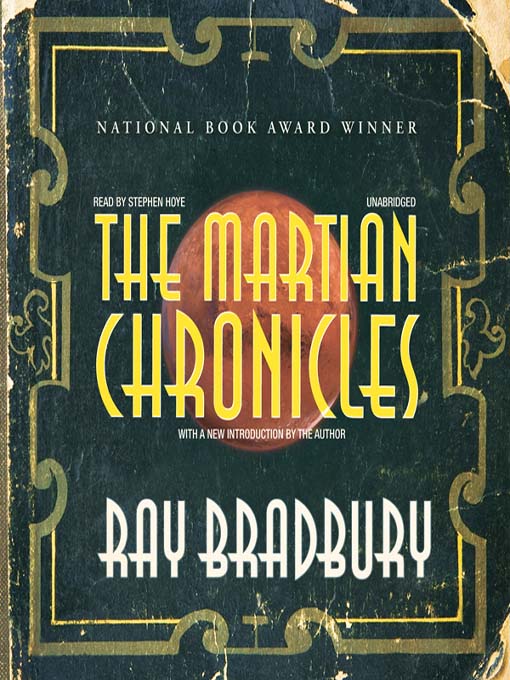 Publisher's Blurb:
There were a lot of these to chose from, since there are dozens of editions of the book out. I share here the one that goes with the Blackstone Audio version:

In connected, chronological stories, a true grandmaster enthralls, delights, and challenges us with his vision, starkly and stunningly exposing our strength, our weakness, our folly, and our poignant humanity on a strange and breathtaking world where humanity does not belong.

My Review:
I think I have to start with Bradbury's own take on the book, from the introduction to the audio book. He describes the stories as not really science fiction, or about Mars, but rather fables or parables, the author's exploration of humanity. Certainly the prose is lush and at times the stories are pointed. In fact, one thing I think no one could argue with is that Bradbury is a master of prose.

It might be best not to think of the stories as SF, since the date of their composition puts the vision of scientific advances at, shall we say, a disadvantage. I'm always interested, when reading classic SF, to see what writers got right, and what they got wrong. Bradbury creates a fully-automated house that a Silicon Valley billioniare could build today (and for all I know, may have). But other things are laughable: clear, instant telephonic communications between Earth and Mars, and private, "family rockets," used even for travel between different parts of the planet. Nor was there any imagination of the cell phone or the computer (let alone the PC)--not surprising, given when they were written. It doesn't matter, because the stories are about humanity and society, not science. (We'll leave aside what we now know about the surface of Mars; Bradbury went with the views of his time on Martian canals).

In one area of his critique of society, though, I had to admit to disappointment. I know this was early, and it's probably wrong of me to apply a feminist critique to a book from 1950. But still...even by the end of WWI, let alone WWII, women were coming into their own as thinkers and writers and persons with intelligence and will. Sadly, Bradbury failed to notice it. Every female, human or Martian, in the book is weak, insipid, silly, subjected, subservient, robotic, or some combination of the above. And all are dependent on men, most being absolute stereotypes of the 1950s wife.

I don't think I'm quite willing to let Bradbury off the hook for this. It's the scourge of early SF: it was, in essence, a masculine genre and at heart even misogynistic. I can only be glad that, however slowly and painfully, the genre has evolved to allow that maybe, by say the year 3035 or so, women might be held to be equal to men. We can hope.

My Recommendation:
Despite the above criticism, which as noted may not be fair, I do consider this a masterpiece, and a classic that ought to be read by all, especially by any afficionado of the science fiction genre.


FTC Disclosure: I checked The Martian Chronicles out of my digital library, and received nothing from the writer or publisher for my honest review.  The opinions expressed are my own and those of no one else.  I am disclosing this in accordance with the Federal Trade Commission's 16 CFR, Part 255: "Guides Concerning the Use of Endorsements and Testimonials in Advertising."