Non-fiction Review: Where You Go is not Who You'll Be 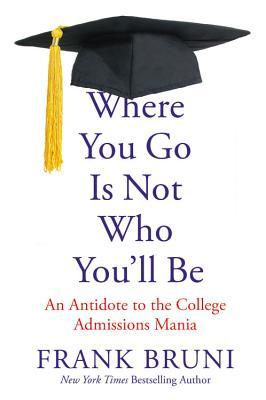 Title: Where You Go is Not Who You'll Be: An Antidote to the College Admissions Mania
Author: Frank Bruni
Publisher: Grand Central Publishing, 2015. 218 pages
Source: Library

Publisher's Summary:
Over the last few decades, Americans have turned college admissions into a terrifying and occasionally devastating process, preceded by test prep, tutors, all sorts of stratagems, all kinds of rankings, and a conviction among too many young people that their futures will be determined and their worth established by which schools say yes and which say no.

That belief is wrong. It's cruel. And in WHERE YOU GO IS NOT WHO YOU'LL BE, Frank Bruni explains why, giving students and their parents a new perspective on this brutal, deeply flawed competition and a path out of the anxiety that it provokes.

My Review:
Every parent of a kid finishing high school needs to read this book, or at least the blurb. Bruni's message is important, whether you are one of the parents getting caught up in the whole Ivy League prestige thing or a parent (or kid) who has more modest ambitions (or means) and occasionally worries this will mean your kid can never be president. It just ain't so. You get out of college (shocking spoiler!) pretty much what you put in, at Yale or Arizona State (or presumably San Francisco State or Whitworth University).


Bruni is a good writer, and his arguments are presented with an impressive mix of statistics and anecdotes (which I realize mean little in some ways, though any tale of an ordinary kid making it big by working hard should be a good reminder of what's possible). My main objection to the book, which was entertaining as well as a good lesson, was that in a lot of ways the whole book is contained in that blurb above. You don't have to read the book, if you're willing to just take his word that finding the right college for you/your kid is more important than just *which* college you find (and yes, "right" can sometimes mean "affordable"). I read the whole thing, but I don't really think anyone needs to. It definitely felt repetitious by the end.

One thing very worthwhile is Bruni's utter blasting of the U.S. News college rankings. Which are, as you might guess, meaningless reinforcements of baseless beliefs. I also appreciated what he had to say about diversity--and the limiting effects of the lack of economic/social diversity at the Ivies (something of some concern to us with the small private school our son is attending; we did have to recognize that no college, even SFSU, would match the diversity of his public grade school and high school). It's worth thinking about.

(Something Bruni didn't address, but which I can vouch for, is the effect on the lower-income kid who gets into a school full of rich kids. It ain't easy being the only one who can't afford to go out for mud pie after midterms. It's another thing to think about when considering the elite schools: do you want to hang out with the elites?)

Recommendation:
As I said, every parent and probably a lot of the teens who are starting the college selection and application frenzy should read this, and mellow out (my boys are naturally mellow, so we've had little stress over the process, though some concerns about finding a good fit).

FTC Disclosure: I checked Where You Go is not Who You'll Be out of my library, and received nothing from the writer or publisher in exchange for my honest review.  The opinions expressed are my own and those of no one else.  I am disclosing this in accordance with the Federal Trade Commission's 16 CFR, Part 255: "Guides Concerning the Use of Endorsements and Testimonials in Advertising."