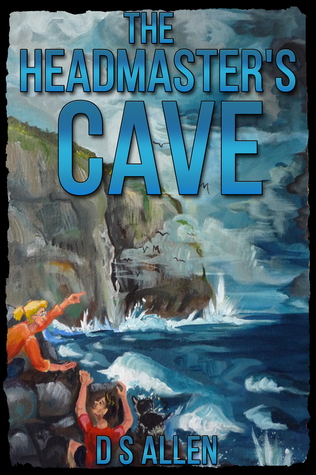 Title: The Headmaster's Cave
Author: D. S. Allen
Published: 2014; 170 pages
Source:  I am participating in a book-review blast and was given a free review copy in exchange for my honest review.

Publisher's Summary:
No one goes into The Headmaster’s Cave.
The 120th anniversary of the disappearance of seven children and their Headmaster in a local cave known as The Headmaster’s Cave is approaching. When George and Dougie receive an unexpected email stating that the mystery has finally been solved, not even Dougie and Katie can persuade George to journey with them to the dangerous and ‘haunted’ cave. Only when Dougie goes missing, will George and Katie, accompanied with his dog, Flanagan, journey to rescue their friend. On their way, they must not only battle their fears, but must also overcome nature’s obstacles, Old Maggie and her dog pack, and the local bullies. But that’s nothing compared to the terror that awaits them in The Headmaster’s Cave, when the mystery is finally revealed.

My Review:
This is a fast-paced adventure for middle-grade readers, with enough peril and tension to keep the kids on the older end of that age range engrossed. It is also a mystery, of a sort, and though I could see through the wild and mystical ideas that the children have about the titular cave, most children will probably go along with the characters' ideas.

I do have a few quibbles with this book. I was bothered by some editing issues--in particular, a number of misplaced apostrophes (a particular pet peeve). But more to the point I found myself having trouble being fully engaged with the main character. He's a bit of a sad-sack, and while the effects of the bullying he endures are probably realistic, they made me not like him all that much. That bullying brings me to another issue: the 120-year-old mystery of the cave and the 7 children who disappeared seems to have too much importance in the village for me to believe it. Really? Other kids bully Dougie and George because they have ancestors who were part of that group? (there may be some more reason for George to be a victim, though he doesn't know it--which to me argues that no one else does, either because those bullies would never keep quiet about it).

So I did have some problems with the story and the way it was developed, though as it went on, I think it got stronger. Once the "quest" is set in motion, the motivations no longer really matter. The kids will go one because they are going on. And the adventure they have is  definitely exciting.

Recommendation:
For kids maybe 10-13 (because there are some kind of grim bits) who like adventure, mystery, and don't mind a bit of maybe mystical stuff too. Oh, and the story is written in British English, just enough to be noticeable, eg. they use a torch, and for that matter have a headmaster, not a principal.

Full Disclosure: I was given an electronic copy of The Headmaster's Cave by the publisher in exchange for my honest review and received nothing further from the writer or publisher.  The opinions expressed are my own and those of no one else.  I am disclosing this in accordance with the Federal Trade Commission's 16 CFR, Part 255: "Guides Concerning the Use of Endorsements and Testimonials in Advertising."
Posted by Rebecca M. Douglass at 10:58 AM