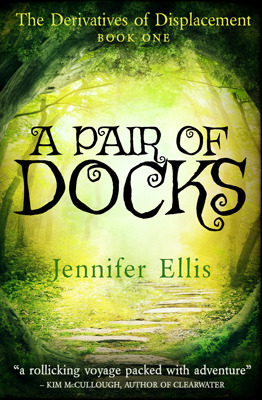 Title: A Pair of Docks
Author: Jennifer Ellis
Publisher: Moonbird Press, 2013. 201 pages
Summary:
At age 14, Abbey Sinclair is very happy to live in a world bounded by the laws of math and physics. So she's not too happy when her brother Simon discovers some magic stones that move them, and Abbey's twin brother Caleb, through time to see their futures. That's not even possible, is it? The children must try to figure out a world that includes time travel and witchcraft, even while others are making use of the stones in sinister ways. With the help of their autistic neighbor Mark and some other adults who aren't exactly trustworthy, but with whom they must go along, the siblings have to solve the riddle of the stones and prevent something very bad from happening.
This is the first novel in the "Derivatives of Displacement" series.
Review:
First, this is an engaging read that moves along at a fast pace and keep the reader turning pages. It is well-written and thoroughly edited, and the plot and the world the author creates both hang together well. That said, I have a couple of issues with the book.
My first problem is not necessarily a flaw the book: I share Abbey's discomfort with the idea that witchcraft could be real. To put it another way, I don't like suggestions that the laws of math and physics might not hold for everyone in an otherwise real world. This means that the whole premise of the book--that the stones work because witches made them and witchcraft is real--itches me a bit. It does the same to Abbey; I think that's part of the point of the book: she has to figure out how to deal with her loss of her rational defenses. But I am bothered by this in a way that purely magical worlds don't bug me, because in a way it feels like denying science.

My second issue has to do with Mark, the autistic neighbor. It's a matter of labels: the book refers to him as having Asperger's Syndrome, but his level of functioning feels to me more like actual autism, especially in an adult.* I don't mind the way Mark is portrayed, I just wish the distinction between autism and Asperger's were a little clearer.**

Aside from those two quibbles (which really don't deserve the amount of space I gave them), this was an engaging book with a strong element of mystery and just the right amount of peril, I think, for middle grade students.

Recommendation:
Perfect for lovers of time travel and those not bothered by fuzzy lines between reality and fantasy!

*My experience (which is not extensive, but there is a fair bit of Asperger's in our family, manifested in a variety of ways) suggests that people with Asperger's function a bit better than that, especially by adulthood. My brother feels his sons run about 2-4 years behind their age, emotionally. In their 20s now, they deal with their obsessions and fears in a fairly mature way, so that though you can tell, it's not debilitating. Mark's autism is pretty debilitating, though the depiction of him is not unkind. It just seems to me to match autism better than Asperger's.

**I must admit that clearly the American Psychological Association also wishes it were clearer; in their latest DSM, they rolled the two into one, to the immense annoyance, not to say confusion, of parents of kids with either issue. Presumably they wouldn't have done this if it weren't often hard to draw the line between the two.

Full Disclosure: I was given an electronic review copy of A Pair of Docks in exchange for my honest review, and received no other compensation for said honest review.  The opinions expressed are my own and those of no one else.  I am disclosing this in accordance with the Federal Trade Commission's 16 CFR, Part 255: "Guides Concerning the Use of Endorsements and Testimonials in Advertising."
﻿
Posted by Rebecca M. Douglass at 12:30 AM