What a great challenge this week from Chuck Wendig! Playing off the cliche of describing one's work as "such and thus meets such and thus" ("Superman meets My Little Pony!"), he gave us two lists of well-known stories and types. It only took me 3 rolls of the dice to get a combo I couldn't resist: James Bond meets Alice in Wonderland. I very nearly made that one literal (and maybe I will yet--what a wild story that would be!). Here's what happens when a tough-guy agent finds himself down the rabbit hole. He gave us 2000 words, but I stopped short of that.


Call me Nails. Rusty Nails. Everyone at the Service does, because I’m tough as nails and unpolished as old iron. There’s nothing out there can surprise me. Not any more.

I'd been saying that for years when I found out it wasn't true. I was behind enemy lines, way behind. Never mind where; nothing ever came from loose talk about stuff like that except dead agents, and I’m not that sort.

The thing is, everything was going well. I located the secret hideout of the folks we were after, and I got the papers. No one knew I was even there, except a couple of dames. They were something else, those dames. Hair down to here, and legs up to there, and all parts in working order, if you know what I mean. I probably shouldn’t have stopped to make sure, but that’s what we do, you know? It’s part of the job. If one of our agents left a place like that one without stopping to check out at least one blonde, we’d know he was a plant, see?

Anyway, that slowed me down a bit, and I missed my pick-up, which left me having to find my own way out. The dame gave me directions to a secret exit, but it turned out she wasn’t the only one who knew about it. Or maybe I wasn’t the only one she told, though that’s not the way it’s supposed to work. We only seduce those babes so that they’ll be on our side, after all.

So I’m headed for the exit, and a half a dozen goons in black suits pop up between me and the way out. I’d have taken them all out with a few good kicks and jabs, and maybe that special gadget HQ gave me to try out this time, but they had some big guns, and Rusty Nails isn’t an idiot. There was only one place to go, and I went. Without breaking stride, I turned and dove out the window, hoping like galloping blue thunder that I’d land in the water below, not on the rocks.

The thing was, once I was through that window I couldn’t see either water or rocks. The good news was that the goons stopped shooting at me. The bad news was, I couldn't see either Howie's hideout or the ground.

I fell for a long time, and landed with a thump, rather than the splat I should have made, in the middle of a grassy field. Given the climate around Howie's place, that didn’t seem likely. I admit my first thought was that either I’d been shot and  I was dead—though an empty grassy field wasn’t exactly my idea of heaven, if you know what I mean—or I’d been shot and I was hallucinating. Though why grass I don’t know. I never was assigned to the War on Drugs, and a good thing, too.

I’ve nothing against grass. It just never entered much into my consciousness. I’m a city boy, and I do gadgets and high tech weapons and a bit of direct action. I’m no tree-hugger.

When I hit ground and looked around, I began to think I might want to find a tree to hug, or at least to hide behind. The landscape looked a lot like my Uncle Cal’s farm, except not quite. I never saw plants in quite those colors. They weren’t neon purple and orange like a bad trip, just…different. Out of this world in some way I couldn't quite put my finger on.

Out of this world…the thought gradually penetrated my brain, and I didn’t like where it was leading. I liked it even less when a troop of armed rats popped up and I found myself surrounded. Their swords could only reach about to my waist, but there was nothing down there I wanted to risk. I could have kicked quite a few of them into the middle of next week, but there were hundreds of them. Nothing doing.

I went where they pointed me. That meant hiking a long way across the meadow until we reached some trees. Like I say, I’m a city boy, but I’m pretty sure no trees should look like that. Nor do rats run around with swords, not even in New York.

Those rats were starting to poke me with those swords, because I didn’t like to enter the forest. First rule is not to get yourself where you can’t see what’s coming at you, and those trees were thick. The second rule was not to let the bad guys take you anywhere private. I wouldn’t stand a chance in those trees, not from the rats and not from Howie's goons, if they were somehow behind this.

Sure, I was beginning to think Howie’s goons were the least of my worries, but it felt better to fret about them than to wonder just where in blazes I’d ended up. This was no place I’d ever been or heard about. Even the Medocino Coast wasn’t this weird. I knew I hadn’t eaten or drunk anything at Howie’s hideout, but could someone have shot me full of something? It’s an occupational hazard, getting drugged with all sorts of strange stuff, experimental things that the baddies want to try out, you know. It had to have been a dart, unless the dames did it while I was distracted.

This didn’t feel like a trip. This felt 100% real, except for the part where it was totally impossible.

Eventually I found myself in front of a laughably royal-looking couple. I mean, they looked like the king and queen out of a bad fairy tale illustration. But they weren’t laughing, and I wasn’t laughing either after the rats kicked the backs of my knees until I went down.

“Kneel before royalty, you fool,” the head rat commanded.

“I don’t believe in kings and queens, rat,” I snarled, trying to stand up. Never let them get you on the ground. The rats swarmed me, knocking me to my face and sitting on me to hold me there.  I decided maybe it wasn’t time for a lesson in democracy.

“What,” asked a voice like sandpaper on sheet metal, “is this?”

“An interloper, Majesty,” answered the lead Rat. “We found it in the Great Meadow.”

It? I was offended. I sure as blazes wasn’t any “it,” and I’d happily prove it…I bit my tongue. The hardest lesson in my business is to learn when to be cocky and when to shut up. I was pretty sure that staying shut up until I figured out where I was and why would be a pretty good idea.

Since I wouldn’t talk, after a long time they hauled me off again, and tied me to one of those weird trees. Bits of purple fluff drifted down and made me sneeze. Then they left me there, and I got to try to piece it all together.

The questions they asked me had told me a few things. I sure enough was down the rabbit hole, through the wardrobe, and over the river and through the woods to boot.  I was going to need everything I’d learned from my childhood reading to get out of this one. I only wished I’d read more of those fantasy stories and fewer westerns and spy stories. I didn’t think that I’d get home by being the fastest shot in the West, nor the fastest martini, either.

For the time being, I wasn’t going anywhere. Those rats knew their knots, and I could barely twitch, they’d trussed me up so tight. Of course, all us agents know how to get out of a situation like that, so as soon as they left me alone, I set to work to get loose.

It took a long time. When I at last had the ropes off, it was dark. Also, my feet were asleep, and I almost fell over when I stood up. That slowed me down enough to make me think.

Where was I going? I sure as god made little green horse apples couldn’t find the pickup point from here.

First things first. I’d had nothing to eat or drink at Howie’s, and nothing since arriving in this place. I needed to get something, and soon. My mouth was so dry you could start a forest fire in there, and my stomach though my throat had been cut.

At least this place seemed to have a moon, just like home. Though as a city boy I’d never paid the moon much attention, I was realizing now that a big light in the sky had it's uses. I could see my way back to where the king and queen had been seated earlier, and I could see when I got there that they had been feasting. No one had cleared the tables, and no one was around. I hesitated for just an instant before I picked up a pitcher of something that smelled like juice. The rule against eating and drinking in enemy strongholds was beaten into us, but circumstances, I told myself, had changed.

I swallowed the last of the juice and wiped my mouth. It was good, and I almost didn’t care what it did to me.

Or maybe I did care, a little. I didn’t get huge or shrink or drop dead, but things got even weirder from that point. It must have been some kind of psychedelic drug, because everything turned the most incredible colors. Trust me, nothing in nature looks like that, yet I had the feeling that I wasn’t hallucinating, but that I was only now seeing the place as it really was. I mean, I’d known that the colors were all wrong, but this was something else again. I wandered off a bit, and saw a green light through the trees.

That led me to the party. All kinds of animals were there, all wearing clothes and the most amazing array of hats. They were eating, drinking and dancing like wild. It seemed perfectly natural, and I forgot that these where the guys who’d tied me to the tree. I joined the dancers, working my way toward the tables of food.

It was three days before I remembered Howie, my mission, and my boss. They’d all figure I was dead. Maybe I was. Did it matter? I took a look around at the softly fluorescing purple and orange trees, and the tables full of food.

“Pass me some more of that cake, will ya, pal?” 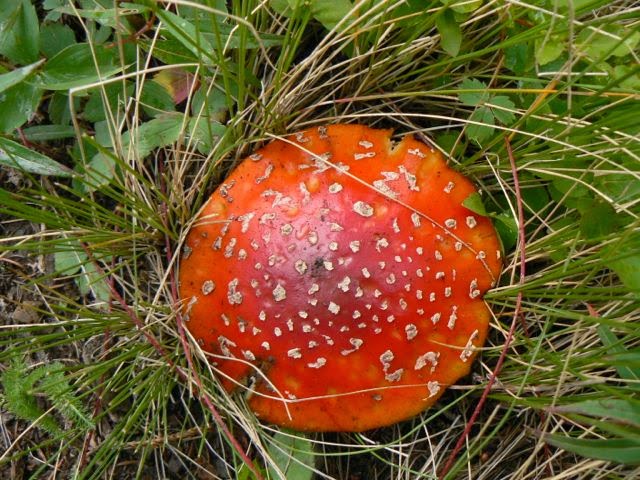