It's Flash Fiction Friday, and I've taken up another of the Douglass-Pett challenges. The title for this week was "Split Second," and the comment that it had been a long time since Xavier Xanthum had made an appearance gave me direction. Kitty Comet made his first appearance around Christmas time last year...

Xavier Xanthum, Space Explorer, lounged in his PT pod, watching the nearby planetoid and playing with his cat. The pod had the best view window on the Wanderlust, and made a nice place to help Kitty Comet learn to cope with low gravity. And if watching a kitten play on a planet’s surface was amusing, watching one play in free-fall was even more so.

Larry’s voice came over the speaker. “You need to exercise in at least ¾ Earth Gravity, Xavier.”

Xavier looked around and spotted Larry. The disembodied eyeballs that were the computer’s manifestation floated behind him. “I’m helping Comet adjust to Zero G.” Xavier held up a string, which followed his hand in a lazy ripple. The cat leapt from the wall, trying to grab the string before she floated on to thump gently on the opposite wall. “I didn’t come in here to work out. I came for the view. Isn’t it beautiful?”

Xavier gestured at the view window, and Larry’s eyeballs rolled a bit in that direction.

“Under the definition of ‘beautiful’ constructed from your preferences and those of others, yes. Are you going to land?” Larry never could quite forget that he was a computer, though a thoroughly self-willed computer.

“Negative. It does not appear to be included in the quadrant maps for this System.”

Xavier sat up, interested. He let go of the string, which began a very slow drift toward the recirc intake. Comet snatched it, and kitten and string tumbled in mid-air, tangling together. Xavier watched with a smile, but his mind was already on the possibilities the planet presented.

“This could be our big break, Larry,” Xavier said. “Who knows what might be down there?”

A silence ensured, during which Larry ran something through his electronic mind. He liked to pretend that he thought at human speeds. “I wish you hadn’t said that,” was his eventual and un-computerish response.

Xavier noticed his computer’s odd response, and didn’t rush. He did find that thinking first increased the chances of survival, in any case. Scooping up the kitten, he pushed off toward the control room, thinking. Whatever Larry had noticed, it hadn’t been definite enough for him to say right out. But he’d seen something.

An hour later, Xavier gave up. “Larry, I can’t find a thing wrong with this planet. What has you so jumpy?” He maneuvered the ship into a somewhat closer orbit, in hopes of learning more without actually landing.

Xavier whistled softly. Larry calling him “Captain” was a bad sign. Larry admitting to not knowing something was worse.

“Look at the cat,” Larry commanded suddenly. Xavier spun around, grabbed a grip-bar to stop his spin, and spotted the cat. Comet was staring at the small view window, and her fur stood up all along her back. Her tail was twice as big around as usual, which made it huge, because in low gravity her fur stood out a lot in any case.

“Meow!” The fur-ball turned her back on the window. The control room had just enough gravity for her to sit, raise a hind leg, and wash her unmentionables, in a clear act of defiance. Her fur did not settle down.

“Wow.” Xavier wasn’t sure if he’d said it or Larry. The cat had never reacted like this before, and both the human and the computer eyes lingered on her before turning to consider the orb beneath them.

“Still, I’d like to go down,” Xavier said. “I can’t really let a cat make my decisions for me.” He looked at the cat again. “Full scan of the surface, Larry, with everything we have.”

Man, floating eyeballs, and cat stared intently at the views and data that filled every screen in the control room. Then the cat backed up, fur again standing on her back, a low growl coming from her throat. A bit later, Xavier thought he saw something. Again, the cat growled.

“Larry, did you see what it was? I just caught a flash—something on screen 3B for a split second—out of the corner of my eye.”

“I will replay that segment.” It was as close as Larry would come to saying he had missed something. A computer ought to be able to see everything, but computer scan was not the same as the old Mark I eyeball. Even if the eyeball was disembodied. This time, as the scan ran, Larry kept one eye on the cat, and the other tracked where the cat was looking. Nothing happened.

“Okay, we might have to go down just to see what’s happening.” Xavier had a hunch they shouldn’t, but he couldn’t run from a planet because something down there scared his cat. He began the descent sequence, while Larry and Comet kept watching the surface.

Xavier’s hands were on the controls to bring them into the final swing around the planet when Larry said, “Pull up now. Now.” His voice had lost all human tones. That, combined with Comet’s yowling, convinced Xavier. With less than a second to spare before he was committed to landing, he grabbed the direct controls, breaking the orbit just as…something…reached for the ship.

Shaken, Xavier stared at the vid screens. “What—what was that? And how did you know?”

“The space body appears to be sentient, not planetoid,” Larry’s flat computer-voice reported. “The cat saw it blink. It reached for us. It is good you have quick reflexes.”

“And that gave me a split second to pull out,” Xavier said. He buried his shaking hands in the cat’s fur. “That was close. Thanks, Comet. Larry, file a report with the proper authorities, and take us out of here. Comet and I are going to take a nap.”

The cat was already curled up on nothing, nose to tail, ready to sleep off the effects of so nearly ceasing to exist. 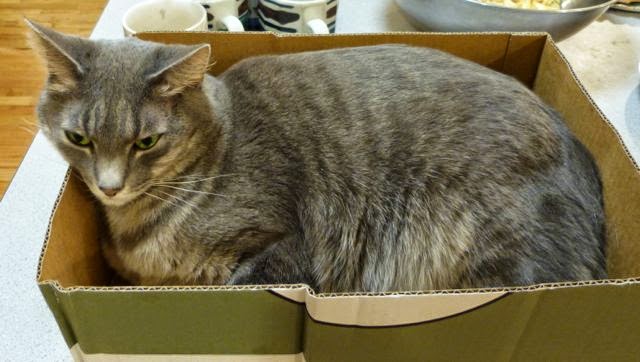