Instead of Flash Fiction, today I'm giving a sneak peek at the opening of the new Ninja Librarian book, due out August 15: Return to Skunk Corners. 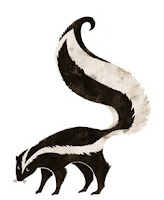 First, though the cover isn't finished so I can't do a reveal, I just want to say it will feature this guy:

And, so do some of the stories.  After all, this is Skunk Corners, right there next to Skunk Springs on Skunk Mountain.

So the story opens: