Middle Grade Review: Inside Out and Back Again


Brief Summary:
Ten-year-old Ha lives in Saigon in the last days of the Vietnam war.  Her father is missing, and the war is getting closer all the time.  When the city falls, they flee with many others, and eventually come to America, and settle in Alabama, where they must learn a completely new culture and language, in a place where people who don't look like everyone else are definitely not appreciated.  The most telling indication of how hard it is there is Ha's own statement:

Review:
Inside Out & Back Again is told in a spare, first-person verse style that is, for me, both moving and frustrating.  Moving, because it is very well done, and it's a hard story to hear without feeling.  Frustrating, because the verse form leaves so much unsaid.  This is my standard reaction to books in verse, and is not necessarily a bad thing.

The story itself is well told, unfolds convincingly (as it ought, given that according to the notes at the back it is in many ways the story of the author's own journey to America), and takes us far enough to be satisfied with the direction Ha's life will be able to take.  The writing is excellent.

Because the verse form is so sparing of words, the 262 pages is actually a great deal less, and it took me only about two hours to read this book.  That makes it in fact something about midway between a short story and a novel, which also explains the feeling that much is left out of the story.  I compare this to many of the works of Karen Hesse, who also writes in a spare poetic form, and also manages to not only convey the emotions powerfully but to carry the story well.  Unless you hate the verse form on general principles, I whole-heartedly recommend this book.

Full FTC Disclosure: I checked out this copy of Inside Out & Back Again from my library, and received nothing whatsoever from the author or publisher in exchange for my honest review.  The opinions expressed in this review are my own and no one else's.

Are you a hiker who now has children and wonders what next?  Check out some of the places we took ours when they were little, and show your child what backpacking is about. 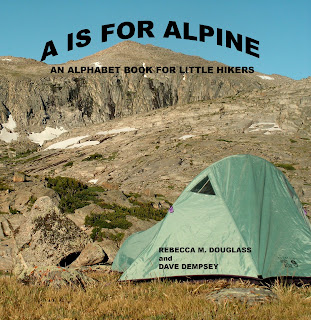