Walking through a silent history

Welcome to the land of the Anasazi, the People Who Came Before.  It's not a terribly hospitable land, not in mid-summer.  Mid-day temperatures hit the triple-digits, and we retreat to our air-conditioned car.  Chaco Canyon seems a most unlikely place to build a civilization.

Yet, from about 800 to 1300 AD, the Anasazi did just that.  They built modest villages, but mostly in Chaco they built giant "Great Houses" that seem to have served mostly a ceremonial purpose.  Today we can wander through the broken remnants of some (carefully excavated and stabilized by the Park Service), trying to imagine what it was like to live there when the canyon was full of people.

Unless, of course, it wasn't full of people.  Archeologists try to figure out what went on there, and now figure maybe only a few hundred people lived in the canyon year-around.  Never mind.  At times the place must have been swarming with crowds, if only because it took a lot of people and a lot of effort to build the Great Houses, up to five stories high, one rock at a time. 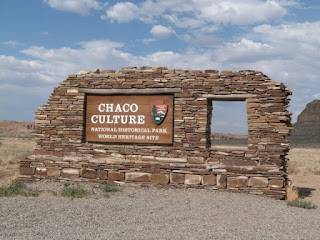 We arrive in the mid-afternoon, when the sun is still too high to do anything but seek the shade.   Chaco Culture National Historical Park is run by the NPS, which did a nice job with the sign at the entrance!  (This after 20 miles of dirt road).  They had good stuff to model it on. 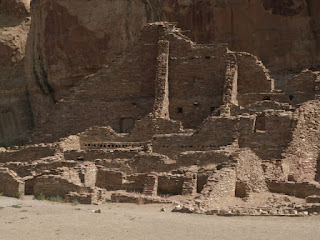 This is the tallest remaining section of the best preserved (and reconstructed) building in the Canyon, Pueblo Bonito.  You can see the round holes near the bottom where the roof beams went in (as well as the stubs of a few beams near the top). 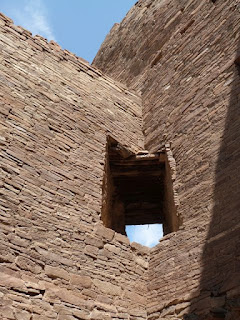 Not all the architecture was simple, either.  These corner doorways led from room to room, back when there were floors and ceilings.  They might have been significant--they didn't use them in very many places. 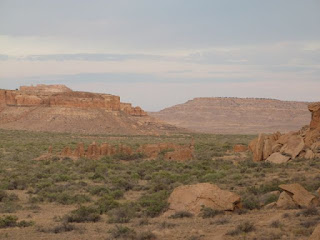 It's not the most hospitable land, but looking at Wijiji in the early light, I have to say it is a setting for those who like the scenery.  Maybe that was part of the draw? 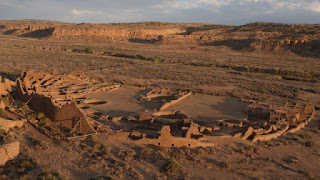 The scope of Pueblo Bonito is best seen from the canyon rim at sunset.  The "D" shape with a courtyard (or two, in this case) seems to have been a standard form.  Since the Anasazi didn't have writing, our knowledge of what they were up to is pretty limited, and largely drawn from the traditions of their descendents, the Hopi and Pueblo peoples of the region.

One thing we do know, is that styles and locations changed over time.  Bandelier National Monument, near Los Alamos, New Mexico, is a much later settlement and seems to be in a distinctly more hospitable setting (though there were nearby houses and villages atop a mesa, with neither water nor farmland--what were they doing up there?). 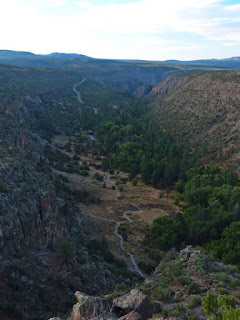 The Canyon sports a year-round creek, which flows to the Rio Grande (perpendicular canyon in the distance).  You can see the remnants of a large, circular house or village in the clearing.

But in Frijoles Canyon [corrected from original.  Bandelier Nat. Mon., but Frijoles Canyon], the Anasazi also had natural shelter.  The volcanic tuff that makes up the canyon walls is soft and ends up looking like Swiss cheese.  They built houses up against the cliffs and made use of the natural spaces as well. 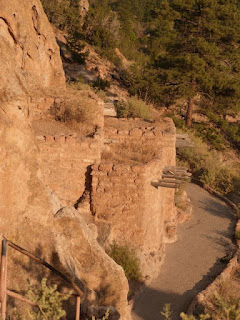 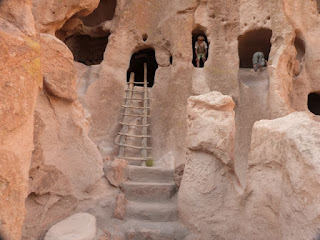 You can tell by the round holes above the cave openings that there were houses in front--those holes held roof beams.

One last photo perhaps best captures my sense in these places of walking where the ancients went before.  On Tsankawi Mesa, the paths themselves were worn deep into the rock by hundreds (or thousands?) of feet over time. 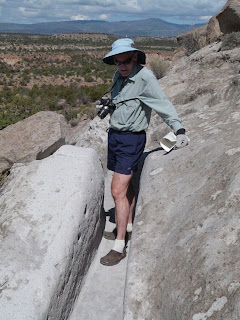 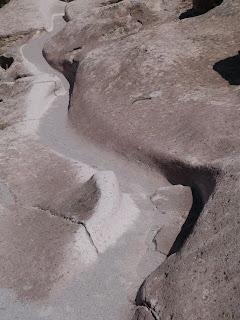