I had to pull it together at the last minute, but I couldn't pass up this week's #writephoto prompt from KL Caley at New2Writing.com, because the photo is mine! 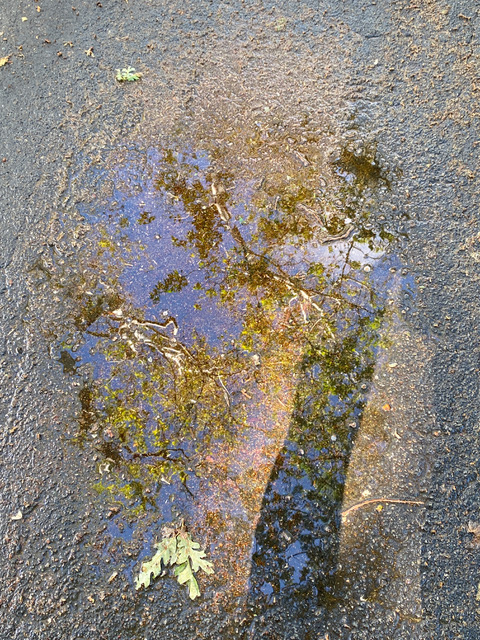 It was just a walk in the park.

Lady Wilhemina Anscott-Bartleby, known to her friends as Willie and to all the old biddies as “that dreadful daughter of Lord Bartleby, poor man,” snuck out of the house as soon as the rain stopped. Three days shut up with the family and her parents’ dreadful friends was more than enough. Fresh air was required.

To avoid problems with servants and relations, she dressed in boy’s clothes and snuck out the back door, her outfit crowned by the most disreputable newsboy’s hat. Actually, Willie knew Tommy for a perfectly respectable newsboy with an excellent reputation. What’s more, he had a head for business. He’d driven a hard bargain about that hat. She’d ended up not only paying him full replacement costs but an extra charge for the time he’d spent breaking it in for her. Now Tommy wore a very natty new cap, and Willie hid her mass of shining red-brown hair under the ratty one.

That afternoon in the park she discovered the drawbacks of her disguise.

She was ambling down one of the paths covered by dripping trees when she found herself confronted by a local gang of urchins. They’d marked her down as a strange boy, always fair game. Cornered before she knew she needed to flee, Willie faced a half a dozen truly disreputable boys, at least three of them larger than her.

“Want to fight?” The largest and most belligerent offered. The others laughed.

Willie had to agree. It was absurd for her to fight a hulking brute on the cusp of manhood. Flight was her best option.

She took one step toward the boys, fists clenched. They stepped back in momentary confusion. She whirled and ran.

Willie splashed through several dark, dirty puddles, uncaring. Glancing down as her dripping foot approached another puddle, she saw reflected in it... blue sky through white branches? In the second before her foot hit the ground, she registered the impossibility.

Her foot hit the water cradled in a shallow depression of the pavement—and kept going. She was falling. She gave herself up for lost. Once down, she’d be at the mercy of the boys she could hear closing on her.

She didn’t hit the pavement.

The ground where she’d stepped simply wasn’t there. In a moment, neither were the voices of the boys. She thought she heard the tone of their shouts change from triumph to fear in the moment before they were cut off.

A moment or two later, she did stop falling. With a thud. Fortunately, the branches she’d seen in the pool broke her fall. She was stunned, but when she recovered her breath, she decided she wasn’t injured.

Still lying in the mud, she peered about as best she could, and saw not a single tree or plant she recognized. The day was pleasantly warm, with sun filtered through the thick forest canopy, dominated by smooth white bark. The path was unpaved, but the puddle remained, now mostly soaked into her breeches.

At that juncture, Willie thought her walk in the rain-washed park might have been the most ill-judged decision of her life. When she realized that there were half a dozen children looking at her, every bit as dirty and suspicious as the boys she’d escaped, she was sure of it. When she saw that these children were armed with spears, she gave herself up for lost.

The oldest child—a girl, as far as Willie could tell, though all wore breeches—said something. Willie didn’t understand a word. It wasn’t English, and it wasn’t any of the three or four other languages she’d dabbled in at school.

“Does anyone speak English?” she asked without much hope.

The only answer was a prodding with the spears that communicated that she was to go with them. Moving cautiously, checking to see if anything was broken, Willie pulled herself to her feet. When she found she was whole, she went where she was directed.

Aided by an occasional poke in the backside with a spear—and indignity she resented but couldn’t prevent—Willie found herself entering a sort of a  castle.

In the center of a warm and sunny courtyard, the children told their tale to a man with a sword and an air of authority. Their gestures told of seeing the strange person falling out of the treetops and into the puddle.

Not knowing what else to do, Willie stood there and smiled at the man. When the children finished, he smiled back at her. He gave the children some sort of order, and they scampered off.

She and the man stood and looked at each other, unable to communicate except by smiles. He didn’t seem in any doubt that she was female, perhaps because her cap had come off in her fall and was now being worn by the oldest child.

After a minute, an elderly man appeared from a doorway. He wore a worn tweed suit, and brightened at the sight of her.

“Gracious! A pleasure to meet you, um, miss?” He glanced at her breeches and chose to overlook them, returning his gaze to her face. “So someone else has discovered the portal at last.”

“I stumbled on it, yes,” Willie admitted. “I do apologize for my appearance.”

“Oh, not to worry. I was equally muddy on my arrival. But how did you know to wear trousers?”

It took a lot of explaining, both ways.

In the end, Willie accepted that there was no going back. She wasn’t sure she wanted to. Women here, her new friend told her, were equal with men. There was the little problem of needing to train to fight ogres and dragons, but aside from that...

And there was the man in charge. Such a very different sort from the fashionable young men her father wanted her to marry. Really, it was a most fortunate thing.