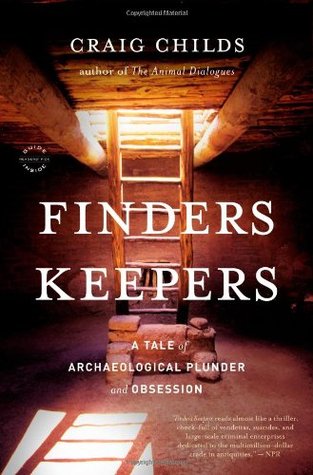 Publisher’s Blurb:
To whom does the past belong? Is the archeologist who discovers a lost tomb a sort of hero--or a villain? If someone steals a relic from a museum and returns it to the ruin it came from, is she a thief? Written in his trademark lyrical style, Craig Childs's riveting new book is a ghost story--an intense, impassioned investigation into the nature of the past and the things we leave behind. We visit lonesome desert canyons and fancy Fifth Avenue art galleries, journey throughout the Americas, Asia, the past and the present. The result is a brilliant book about man and nature, remnants and memory, a dashing tale of crime and detection.
My Review:
I'm a fan of Craig Childs for the above-mentioned "trademark lyrical style," which has given us in several other books a paeon to the desert Southwest and the traces of the people who came before. In this case, it might not fit quite as well. Or maybe it does.

The book is half a hymn to the remnants of the past, and half an investigation into what we do with them. There is no question that to Childs, those archaeological remains are something more than objects, and more than history, too, and his passion for their right to be left alone is eloquent. His argument for leaving artifacts as and where they are (a decision he concludes every researcher must make for his or her self) is comprehensible and emotionally powerful. His exploration of the ways artifacts have been plundered in the past and are still being plundered may leave the reader angry, but I felt that Childs himself is less willing to judge, or perhaps finds his judgements derailed by sympathy for those who just want to have and hold bits of history.
But the history of archaeology isn't pretty, and neither is the present fate of many such objects, as pot hunters damage whatever is in their way in the search for the valuable items. What Childs left me with was an unsatisfied feeling of sorrow for what is lost and being lost, and anger at those who ravage history for profit. But he also imbues the book with his own reverence for the objects themselves, pieces of history in out-of-the-way places. I may not agree with everything he says, but his book forces me to think about it all, from the pot sherds we collected as children to the artifacts in museums, in a new and more critical way.
My Recommendation:
This is excellent reading for anyone interested in archaeology, particularly of the US Southwest, but also in a broader sense. Prepare to be angered and saddened at times.
FTC Disclosure: I borrowed an electronic copy of Finders Keepers from my library, and received nothing from the author or the publisher in exchange for my honest review. The opinions expressed are my own and those of no one else. I am disclosing this in accordance with the Federal Trade Commission's 16 CFR, Part 255: "Guides Concerning the Use of Endorsements and Testimonials in Advertising."
Posted by Rebecca M. Douglass at 12:00 AM