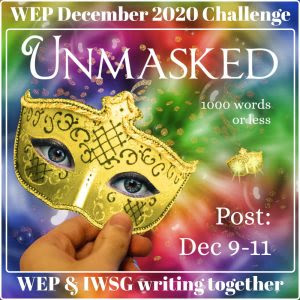 The WEP team has worked incredibly hard all year, and this month we are all taking a break--Write...Edit...Publish... is purely voluntary, with no sign-ups and no one judging anything. I wasn't sure I'd participate, but seeing some others doing so inspired me. I don't think this is the best of my stories, and I haven't worked it over the way I'd like, but I wanted to share something kind of uplifting.

Rosemarie fingered the black silk and feathers, imagining the effect it would have at the party.

The effect it would have had, if there had been a party.

It was meant as the finishing touch for the most amazing dress, something Marie Antionette might have worn, at least in Rosemarie’s imagination. Olive and Carlo’s annual New Year’s Eve bash was such a fixture in their set that she’d ordered the outfit right after last year’s party.

Before they had any idea that the social world would come to a grinding halt only a few weeks later. Now, of course, there would be no party.

No party, no chance to wear the dress, and the mask—she laughed a little, clinging to her sense of humor among all the feelings of loss—covered the wrong part of her face.

Slowly, she lifted the silk concoction and tied it over her eyes, watching herself in the mirror as the feathers—dyed a deep red—stood out around her face. The effect was exactly what she’d imagined. On impulse, she went to her closet and carefully removed the dress from the garment bag it had arrived in.

It wasn’t easy putting on the elaborate garment by herself. She usually got together with two or three of her friends, all dressing together and getting ready for the party in a buzz of excitement.

She hadn’t seen Meggie and Sarah for weeks, and for months, only from a safe distance to call their pointless updates at each other. There were no shared coffees, no hugs, and certainly no sitting shoulder to shoulder at the make-up mirror putting on the elaborate cosmetics that went with the masquerade dresses. Now both Meggie and Sarah had the disease, and couldn’t see anyone, even from a distance.

Look on the bright side, Rosemarie reminded herself. Her friends weren’t struggling for their lives. They were just getting well very, very slowly. Meggie was bored out of her mind. She lived alone, like Rosemarie, and hadn’t seen anyone since she got sick. The food-delivery people left the bags at her door and left before she opened up.

Sarah, on the other hand, was struggling to avoid being swarmed by her children. She was the only one of the trio who’d had children. Sarah had texted that she’d had to lock herself in the guest room and wear earplugs so she couldn’t hear the kids calling for her. At least she wasn’t alone.

More determined than ever, Rosemarie twisted and reached and managed to fasten the dress well enough.

Before she went out, Rosemarie fastened her best black mask over her mouth and nose, lining it up with the silk and feathers. A glance in the mirror told her she looked a bit frightening that way. She smiled under the mask. There were all sorts of ways to force people to maintain a safe distance, weren’t there?

Out the door, three blocks down to the left, and a quick right, and she was at Meggie’s apartment. Second floor, not too high to see her, but it was a chilly afternoon and the windows would be closed. No help for it. Rosemarie pulled out her phone and texted, Look out the window.

Then, to the horror of a couple of pedestrians who hastily crossed to the other side of the street, she pulled off her respiratory mask and, as Meggie pushed open the window, shouted, “Happy New Year!” She added a pirouette to show off the dress, then joined in her friend’s laughter.

“I wish you and Sarah could have helped me get into it, the way we always do! I nearly got stuck!”

They went on laughing and talking until Meggie started to cough. “Ugh! I’m getting better, but I haven’t spoken to anyone in ages, and it makes me wheeze. It feels good, though! I don’t know when I’ve laughed!”

“Wait!” Meggie disappeared from the window for a minute. She came back holding something in a pair of tongs. Leaning way out the window, she let go.

Rosemarie caught the car key and looked up in amazement, though with both masks back in place on her face, it was hard to tell that.

“You want me to drive your car out there?”

“I do! Just don’t scratch the paint.”

Rosemarie almost sang as she drove the car out of the garage and turned towards the edge of town. She hadn’t been farther than she could walk in ten months. Masks, corsets, all that dress a little too tight after too much pandemic eating—she still felt a free as she’d even been in her life.  Thinking of her friends, stuck in their rooms and terrified of infecting someone more vulnerable than themselves, she settled her mask more securely on her face.

Such a small price to pay for freedom.

And, just a reminder--check out my new collection of holiday-themed short fiction! 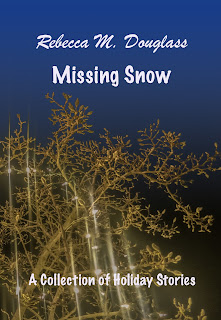 Over more than eight years of blogging, I have written and shared hundreds of short stories. Each year, some of that flash fiction has included Christmas stories and other midwinter tales. This collection brings together the best of those stories with the heartwarming, “Halitor at Midwinter,” for an hour or so of seasonal reading pleasure! Join Halitor, Xavier Xanthum, the Ninja Librarian, and Millicent, head of the Wizard’s Library, in celebrating the season!