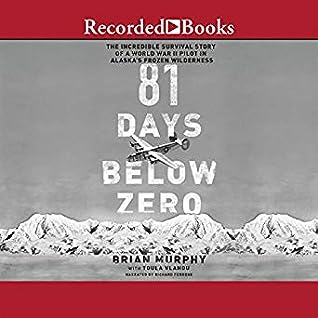 Title: 81 Days Below Zero: the Incredible Survival Story of a World War II Pilot in Alaska's Frozen Wilderness
Author: Brian Murphy. Ready by Richard Ferrone
Publication Info: Audible Audio, 2015. 8 hrs, 42 min. (Hardcover Da Capo Press, 2015)
Source: Library digital resources
Publisher's Blurb:
Shortly before Christmas in 1943, five Army aviators left Alaska’s Ladd Field on a test flight. Only one ever returned: Leon Crane, a city kid from Philadelphia with little more than a parachute on his back when he bailed from his B-24 Liberator before it crashed into the Arctic. Alone in subzero temperatures, Crane managed to stay alive in the dead of the Yukon winter for nearly twelve weeks and, amazingly, walked out of the ordeal intact. '81 DAYS BELOW ZERO' recounts, for the first time, the full story of Crane’s remarkable saga. In a drama of staggering resolve with moments of phenomenal luck, Crane learned to survive in the Yukon’s unforgiving landscape. His is a tale of the human capacity to endure extreme conditions and intense loneliness—and emerge stronger than before.
My Review:
This was one of several books I listened to last month while driving across the country and back. Given how cold some of my camping nights were, I'm not sure if this made me feel colder, or served to remind me that 18 isn't really *that* cold.

Either way the book made for good listening. Meticulously researched, at least as far as I could tell, the story pulls together all the available information from many sources to give a detailed account of Crane's experience in the Alaska winter (too detailed? I did at times wonder how, as I don't believe the author was able to directly interview the subject, there could be so many tiny specifics. I have to assume liberties were taken with regard to dialogue, at the least).
The actual story may have proven a little thin for a full book, but the author works in information on the war, the history of aviation in Alaska, survival, and more. The extras felt occasionally tacked, on but for the most part were good enhancements of the story. In particular, the accounts of the discovery and investigation of the wreck were fully relevant, and used to effect.
The narration was excellent, adding to the overall effect (my hands are cold just thinking about the story!). The main question I'm left with is the one Crane had: how on earth did he get so lucky? Because by all rights, he shouldn't have survived the many mistakes he made.
Recommendation:
Recommended for fans of both outdoor adventure/survival stories and WWII history. I learned a lot about what went on in Alaska during the war, much of which I didn't know.
FTC Disclosure: I checked 81 Days Below Zero out of my library, and received nothing from the writer or publisher for my honest review.  The opinions expressed are my own and those of no one else.  I am disclosing this in accordance with the Federal Trade Commission's 16 CFR, Part 255: "Guides Concerning the Use of Endorsements and Testimonials in Advertising."
Posted by Rebecca M. Douglass at 12:00 AM