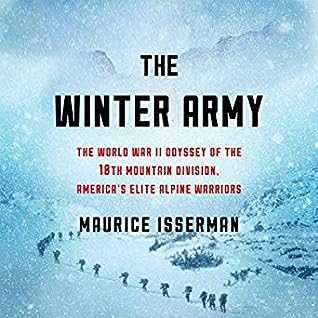 Publisher's Blurb/Goodreads:
The epic story of the U.S. Army’s 10th Mountain Division, whose elite soldiers broke the last line of German defenses in Italy’s mountains in 1945, spearheading the Allied advance to the Alps and final victory.

At the start of World War II, the US Army had two cavalry divisions—and no mountain troops. The German Wehrmacht, in contrast, had many well-trained and battle-hardened mountain divisions, some of whom by 1943 blocked the Allied advance in the Italian campaign. Starting from scratch, the US Army developed a unique military fighting force, the 10th Mountain Division, drawn from the ranks of civilian skiers, mountaineers, and others with outdoor experience. The resulting mix of Ivy League students, park rangers, Olympic skiers, and European refugees formed the first specialized alpine fighting force in US history. By the time it deployed to Italy at the beginning of 1945, this ragtag group had coalesced into a tight-knit unit. In the months that followed, at a terrible cost, they spearheaded the Allied drive in Italy to final victory.

Ranging from the ski slopes of Colorado to the towering cliffs of the Italian Alps, The Winter Army is a saga of an unlikely band of soldiers forged in the heat of combat into a brotherhood whose legacy lives on in US mountain fighters to this day.
My Review:
I’m a sucker for interesting books about bits of WWII, as well as for books about mountaineering and outdoor adventures, so of course I had to check this one out. I got the audiobook from my library, and enjoyed it, but didn’t find it as compelling as I expected. The story is well-written, and many of the players are familiar: David Brower (Sierra Club), Fred Beckey (who wrote THE mountaineering guides to the Cascades), and a couple of other names I knew all showed up on the roster of the 10th Mountain Division.

What held it back was in part how much of the book was about the drive to create the force, and the initial struggles to get it going. The other disappointment was finding out just how little of their mountain training they ended up using. I knew about the elite mountain troops, and somehow I had thought they got to prove that their training and expertise were worth it. Instead, they had very little opportunity to do so, though they fought valiantly and well when they got to Italy, and played no small role in the Allied victory there. They just didn't get to do it on skis.

Reality interfered with a great story, and left us with a very good story, well told. This was an unusual bunch of men, many of whom chose to serve as enlisted men in the 10th rather than as officers elsewhere. They deserve their own chapter in the history books, and I am glad to have read it. Kudos to the narrator as well, for an excellent delivery that never called attention to itself.

Another worthwhile chapter for those interested in those who fought WWII, and how they did it, with a bonus for the skiing and mountaineering.

FTC Disclosure: I checked The Winter Army out of my library, and received nothing from the writer or publisher for my honest review. The opinions expressed are my own and those of no one else. I am disclosing this in accordance with the Federal Trade Commission's 16 CFR, Part 255: "Guides Concerning the Use of Endorsements and Testimonials in Advertising."