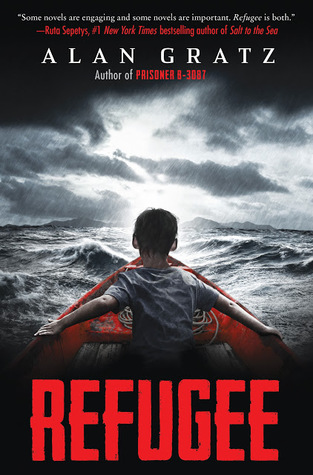 One mission in common: ESCAPE.

Josef is a Jewish boy in 1930s Nazi Germany. With the threat of concentration camps looming, he and his family board a ship bound for the other side of the world…

Isabel is a Cuban girl in 1994. With riots and unrest plaguing her country, she and her family set out on a raft, hoping to find safety and freedom in America…

Mahmoud is a Syrian boy in 2015. With his homeland torn apart by violence and destruction, he and his family begin a long trek toward Europe…

All three young people will go on harrowing journeys in search of refuge. All will face unimaginable dangers–from drownings to bombings to betrayals. But for each of them, there is always the hope of tomorrow. And although Josef, Isabel, and Mahmoud are separated by continents and decades, surprising connections will tie their stories together in the end.

My Review:
I read this because it was the July (!) selection for our Goodreads "Great Middle Grade Reads" group. While I think it is a valuable and important book (though maybe more important for the grown-ups to read than the kids!), I can't say I liked it a lot, or thought it was the best I've read. Maybe more accurate would be to say that I had some issues with the book, but think it was powerful.

One thing I found was that the structure--short chapters cycling among the three main characters--kept me reading. Almost every chapter ended with a cliff-hanger, and I had to read about the other two characters before I could get back to the first, and so on. That was undeniably effective story-telling. The chapters were short, however, and that made it harder to connect with the characters. Maybe I didn't want to, knowing what they might suffer (and I had a niggling memory about Josef's situation, and was correct).

I also had some reservations about the ways in which the stories connected, which felt a bit contrived. One sadly real thread that connected them was the efforts of too many nations (including, yes, the US) to reject refugees, even at the cost of their lives.

In essence, then, I found the powerful storytelling to be a bit diluted by structural choices, which still leaves this both a pretty good read and an excellent wake-up call.

My Recommendation:
At the risk of getting political, I think that those who are ruling our country right now might benefit from an empathetic reading of this book. More realistically, I would recommend it for anyone over about age 12, maybe older. I think this one teeters on the brink of YA, not juvvy, thanks especially to the descriptions of what happened in the concentrations camps of WWII.

FTC Disclosure: I checked Refugee out of my library, and received nothing from the writer or publisher for my honest review. The opinions expressed are my own and those of no one else. I am disclosing this in accordance with the Federal Trade Commission's 16 CFR, Part 255: "Guides Concerning the Use of Endorsements and Testimonials in Advertising."
Posted by Rebecca M. Douglass at 12:00 AM