Hairspray, or, Why Haven’t We Been Going to the Theater?

So last week we were passing through Ashland, OR, and stopped over for the night with friends (because it's a long way from Seattle to home). We were just going to stay the night and move on, but they suggested we stay an extra night and see if we could get last-minute rush tickets for one of the plays. If you aren't familiar with it, Ashland is the home of the Oregon Shakespeare Festival, which puts on about 8 or 10 different plays every summer. Several of the plays are by Shakespeare, but the rest are a mix, some well-known, others written or adapted for the festival. On Tuesday, the one with tickets available was Hairspray.

I can't say I knew much about the show, but our friends assured us it was fantastic--and it was. Which is what led to the question in my title: why haven't we been going to the theater?

Well, okay, there are some good reasons. Theater in San Francisco was ruinously expensive, plus you have to deal with the hassle of getting downtown to see it (and back in the middle of the night). We were busy, and tired, and for years the cost and hassle of getting a babysitter just made it too hard. It's been 6 or 8 years since a sitter was needed, but we got out of the habit.

And now I want back in. It'll maybe have to be community theater, college shows, etc., but all the better: those are affordable. I just want the magic of the dark theater and the lit stage taking me away to another world. 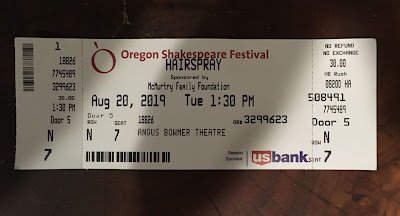