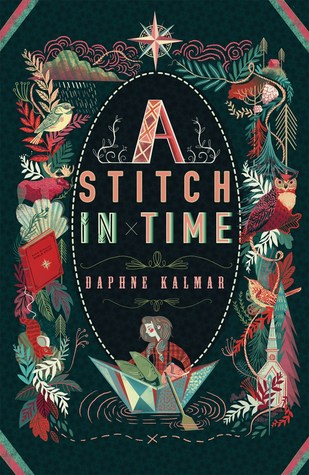 Title: A Stitch in Time

Publisher’s Blurb:
Donut is an eleven-year old geography buff who keeps her taxidermied mice hidden in her late mother’s hope chest. Her pops passed away, leaving her an orphan. Aunt Agnes has moved in, bringing along her lumpy oatmeal, knitting, and a plan to drag Donut off to Boston forever.

Donut stands to lose everything: her friends, her village, her home, the woods, and walks where the memories of her pops are stored up.

While Donut dodges the ache of missing her pops, she and her best friend Tiny plan how to keep her where she belongs. Holed up in a cabin on Dog Pond, Donut clings to the hope that Aunt Agnes will throw in the towel and leave Vermont without her.

A Stitch in Time is shot through with gorgeous, evocative language, and gets right to Donut’s heart.

My Review:
Maybe I never grew up, because I think my reaction to this book is that of a kid: without giving anything away, I was rooting for Donut's own solution to work. The ending was the realistic one, and maybe even better for her, but it wasn't the kid's ending. That kvetch aside, this really was a great, quick read. Donut is a very relatable character, and I liked the way her views of the adults, especially her aunt, shifted into a more three-dimensional understanding. Even the minor kid characters proved more fully human than is often the case.

The writing is tight, and so's the action. Donut has a clear objective and her own ways of getting there. The handling of her grief over the loss of her father is delicate, at times maybe too removed as she goes about being herself, but I think that's also realistic for how a kid might handle such a huge loss--as much as she can, she just doesn't think about it, then is periodically overwhelmed.

I wouldn't mind seeing a sequel to this one, to see how the next phase of her life goes.

My Recommendation:
It was a good read, and well suited to kids from 8 or so up. I do wonder if they will share my disappointment in the ending. The more I think about it, the more I feel like it went the wrong way. Are the adults always right? I felt like the author was telling us they are, but I was never quite convinced.


Full Disclosure: I borrowed an electronic copy of A Stitch in Time from my library, and received nothing from the author or the publisher in exchange for my honest review. The opinions expressed are my own and those of no one else. I am disclosing this in accordance with the Federal Trade Commission's 16 CFR, Part 255: "Guides Concerning the Use of Endorsements and Testimonials in Advertising."
Posted by Rebecca M. Douglass at 5:00 AM