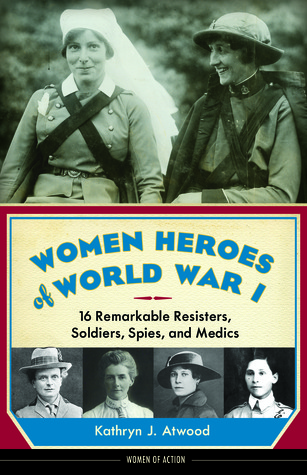 Publisher’s Blurb:
In time for the 2014 centennial of the start of the Great War, this book brings to life the brave and often surprising exploits of 16 fascinating women from around the world who served their countries at a time when most of them didn’t even have the right to vote.

Readers meet 17-year-old Frenchwoman Emilienne Moreau, who assisted the Allies as a guide and set up a first-aid post in her home to attend to the wounded; Russian peasant Maria Bochkareva, who joined the Imperial Russian Army by securing the personal permission of Tsar Nicholas II, was twice wounded in battle and decorated for bravery, and created and led the all-women combat unit the “Women’s Battalion of Death” on the Eastern Front; and American journalist Madeleine Zabriskie Doty, who risked her life to travel twice to Germany during the war in order to report back the truth, whatever the cost. These and other suspense-filled stories of brave girls and women are told through the use of engaging narrative, dialogue, direct quotes, and document and diary excerpts to lend authenticity and immediacy.

Introductory material opens each section to provide solid historical context, and each profile includes informative sidebars and “Learn More” lists of relevant books and websites, making this a fabulous resource for students, teachers, parents, libraries, and homeschoolers.
My Review:
When I picked this book out on the library web site, I didn't see anything to indicate it is a kids' book (though if I'd looked at the reviews I could have figured it out,  since the only review there is from the School Library Journal). As a result, I was frustrated by the lack of depth in the biographical sketches. After the first two or three I looked harder, realized it wasn't meant for adults, and began to consider the information in a more realistic light.

The sidebars and explanations included in the text (some of which had a kind of "duh" feeling for an adult reader) give a lot of good information and background for students, providing the context they need to understand the really remarkable accomplishments of some of the women. In a few cases, it felt like a bit of a stretch to make heroes out of the women, but the majority of them did, in fact, act with courage under fire.

In all, despite the thin information in some areas, I found the book a nice supplement to my other reading on the war as well as on women's history. Further, it offered information about the war in a number of eastern European countries, which I haven't heard much about.

My Recommendation:
In the fine print the book is listed as for grades 6 and up (that's age 11 up, roughly). I would agree with that. The writing is only slightly noticeably simplified for younger readers, and the subject matter is, after all war, so I wouldn't recommend it for younger readers than that.

Full Disclosure: I borrowed an electronic copy of Women Heroes of World War I from my library, and received nothing from the author or the publisher in exchange for my honest review. The opinions expressed are my own and those of no one else. I am disclosing this in accordance with the Federal Trade Commission's 16 CFR, Part 255: "Guides Concerning the Use of Endorsements and Testimonials in Advertising."