I stumbled on one of the books in this trio--not really a series, but 3 books that go together--and had to read them all. Here's my take on the whole set of them. 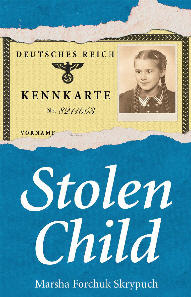 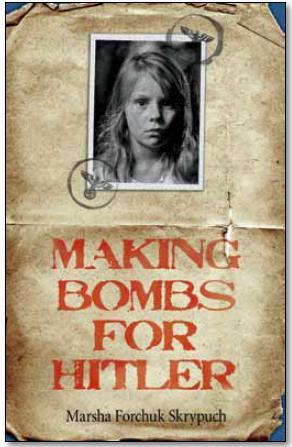 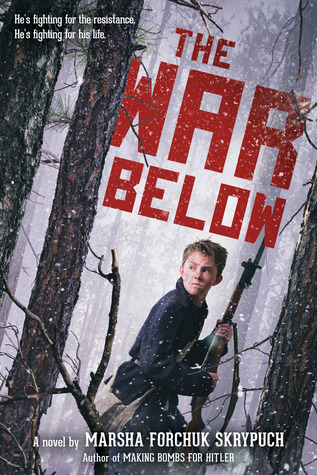 Title: Stolen Child
Publication info: Scholastic Canada, 2010 (with a note on Goodreads saying originally published 2000). 154 pages. Scholastic (US) appears to be releasing an edition in 2019, changing the title to Stolen Girl.

Publisher's Blurb:
Stolen from her family by the Nazis, Nadia is a young girl who tries to make sense of her confusing memories and haunting dreams. Bit by bit she starts to uncover the truth — that the German family she grew up with, the woman who calls herself Nadia's mother, are not who they say they are. Beyond her privileged German childhood, Nadia unearths memories of a woman singing her a lullaby, while the taste of gingersnap cookies brings her back to a strangely familiar, yet unknown, past. Piece by piece, Nadia comes to realize who her real family was. But where are they now? What became of them? And what is her real name?
This story of a Lebensborn girl--a child kidnapped for her "Aryan looks" by the Nazis in their frenzy to build a master race--reveals one child's fierce determination to uncover her past against incredible odds.

Title: Making Bombs for Hitler
Publication Info: Scholastic Canada, 2012 (US edition in 2017; this time they didn't change the title, just the cover). 186 pages

Publisher's Blurb:
In Stolen Child, Marsha Forchuk Skrypuch introduced readers to Larissa, a victim of Hitler’s largely unknown Lebensborn program. In this companion novel, readers will learn the fate of Lida, her sister, who was also kidnapped by the Germans and forced into slave labour — an Ostarbeiter.

In addition to her other tasks, Lida's small hands make her the perfect candidate to handle delicate munitions work, so she is sent to a factory that makes bombs. The gruelling work and conditions leave her severely malnourished and emotionally traumatized, but overriding all of this is her concern and determination to find out what happened to her vulnerable younger sister.

With rumours of the Allies turning the tide in the war, Lida and her friends conspire to sabotage the bombs to help block the Nazis’ war effort. When her work camp is finally liberated, she is able to begin her search to learn the fate of her sister.

In this exceptional novel Marsha Forchuk Skrypuch delivers a powerful story of hope and courage in the face of incredible odds.

Publisher's Blurb:
The Nazis took Luka from his home in Ukraine and forced him into a labor camp. Now, Luka has smuggled himself out -- even though he left behind his dearest friend, Lida. Someday, he vows, he'll find her again.

But first, he must survive.

Racing through the woods and mountains, Luka evades capture by both Nazis and Soviet agents. Though he finds some allies, he never knows who to trust. As Luka makes difficult choices in order to survive, desperate rescues and guerilla raids put him in the line of fire. Can he persevere long enough to find Lida again or make it back home where his father must be waiting for him?


My Review:
This isn't a standard sort of trilogy, because it's not a linear series, but 3 books about 3 characters whose lives overlap during the war. I got hold of them all out of the order of publication, which doesn't really matter, though reading Stolen Child first with no idea of the story (as given away in the blurbs) might make it a more exciting read--where the reader doesn't know any more than Nadia does about her past.

Although Stolen Girl is very suitable for younger readers (8 and up), the other two take place in the heart of the war and might be better suited for 11 or 12 and up. Not that the author gets really graphic about what goes on, but... consider that Luka's story begins with him crawling out from a pile of dead bodies in the back of a truck, and judge from there. They are war stories about children (Luka's age seems fluid, but he's 12 or 13 when he meets Lida, though he seems much older. She is only 9, and also seems much older) who survive by doing and enduring things that seem to this protected reader to be virtually impossible. The author does admit that few children so young were taken in the slave programs, and still fewer were kept alive to try to do the work demanded, so she may have been stretching reality a little. But we do know that young children did and endured extraordinary things to survive the war.

The stories are simply written and fast-moving, not so much from crisis to crisis (though that is more true for Luka's story) but just with the progress and the insights each character gains into his or her  circumstances. After all, the children don't have any idea at first what has happened or why, or to what degree all civilized rules have been suspended.

I appreciated putting all three books together and getting more of the whole story. And it was enlightening, to say the least, to learn about what happened to the Ukrainians during and--worse still--after the war. As with so much children's historical fiction, the books are well-researched and based on actual events we never read of in the history books.

My Recommendation:
These are excellent books, well-written and suitable for ages 11 or 12 and up. Adults will find the stories just as gripping, and we can all learn some history.


FTC Disclosure: I checked all three books out of my library, and received nothing from the writer or publisher for my honest review.  The opinions expressed are my own and those of no one else.  I am disclosing this in accordance with the Federal Trade Commission's 16 CFR, Part 255: "Guides Concerning the Use of Endorsements and Testimonials in Advertising."
Posted by Rebecca M. Douglass at 12:00 AM