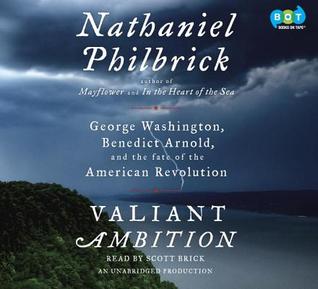 
Publisher's Summary:
In September 1776, the vulnerable Continental Army under an unsure George Washington (who had never commanded a large force in battle) evacuates New York after a devastating defeat by the British Army. Three weeks later, near the Canadian border, one of his favorite generals, Benedict Arnold, miraculously succeeds in postponing the British naval advance down Lake Champlain that might have ended the war. Four years later, as the book ends, Washington has vanquished his demons and Arnold has fled to the enemy after a foiled attempt to surrender the American fortress at West Point to the British. After four years of war, America is forced to realize that the real threat to its liberties might not come from without but from within.

Valiant Ambition is a complex, controversial, and dramatic portrait of a people in crisis and the war that gave birth to a nation. The focus is on loyalty and personal integrity, evoking a Shakespearean tragedy that unfolds in the key relationship of Washington and Arnold, who is an impulsive but sympathetic hero whose misfortunes at the hands of self-serving politicians fatally destroy his faith in the legitimacy of the rebellion. As a country wary of tyrants suddenly must figure out how it should be led, Washington’s unmatched ability to rise above the petty politics of his time enables him to win the war that really matters.

My Review:
I think the publisher's summary nails it pretty well: "a complex, controversial, and dramatic portrait." I appreciated that the author appeared to give a hard look at Washington's failings as well as his strengths (including recognizing that he learned to be a good general; he wasn't born that way). Unfortunately, the word "complex" also sums things up well. There is a lot in this book, and I found it hard to keep all the characters sorted out and to follow the history, or at least to fit it into what I already know.

The key thread, however, of how Arnold went from hero of the rebellion to traitor, is pretty clear and pretty well presented, even if I had to sort it out from the many other threads and characters. That, in fact, is my main criticism: the author may have tried to take in too much, and there were far too many characters to keep track of, especially in the audio book. I ended up feeling as though there were a lot of life stories being told me, with often very little understanding on my part as to why this person mattered. Again, in print, a little flipping back and forth might have solved the problem, but in audio, it left me mostly feeling confused.

My Recommendation:
Interesting topic, educational, but hard to follow, at least as an audio book. Read it if you are in need of a better understanding of the American Revolution and have patience.

FTC Disclosure: I checked Valiant Ambition out of my library, and received nothing from the writer or publisher for my honest review.  The opinions expressed are my own and those of no one else.  I am disclosing this in accordance with the Federal Trade Commission's 16 CFR, Part 255: "Guides Concerning the Use of Endorsements and Testimonials in Advertising."
Posted by Rebecca M. Douglass at 12:00 AM