Great Escapes Tour: The Trouble With Harriet by Dorothy Cannell 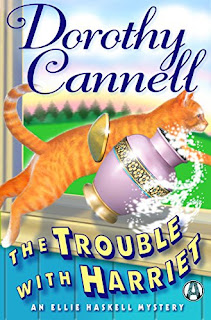 The Trouble with Harriet: An Ellie Haskell Mystery

Publisher's Blurb:
Ellie Haskell and her husband, Ben, haven’t taken a vacation in years. Now their suitcases are packed, their tickets are booked, and they’re ready for a romantic getaway in France. But everything goes awry after a chain-smoking fortune teller makes a dire prediction: “Take that trip at your peril!” Those ominous words ring true when Ellie’s prodigal father, Morley, suddenly appears with the remains of his ladylove, Harriet, whose untimely death in a car accident has left him bereft.

But after Morley loses the urn in a bizarre series of events, Harriet’s family is furious. Now a bewildered Ellie finds herself asks some probing questions: Who or what was in that urn? Could her father be a pawn in a deadly game? And what exactly is the meaning of that darn prophecy? Ellie just hopes she lives to find out whether the answers are worth the trouble.

My Review:
I'm not quite sure how I feel about this one. It's a light-hearted romp in many ways, with over-the-top characters and situations. Note that I don't consider that a bad thing at all. So I'm not sure just why this one didn't sit so well with me. Maybe there were too many characters who were too absurd (the vicar rather bothered me). Maybe it was just being the wrong book at the wrong time. Because really, it was kind of a fun read in spite of my moments of irritation.

So is this a positive review? Well, it's not a negative review. I think the book would make a decent beach read, as long as you go into it knowing that much of it is a celebration of absurdity. My only real objection was that I found the ending a bit contrived, and the lengthy explanation of who everyone was and what happened bothered me--I like the sleuth to actually figure out more of the truth on her own. Other than that, I rather enjoyed the mess and Ellie's efforts to find a thread of sanity in the midst of it all.

My Recommendation:
Like I say, this is a promising read for a time when you are ready to embrace the absurd and enjoy some mystification. I appreciated that, with the sleuth happily married, the romance elements were minimal (if you are tired of young women who can't make up their minds who they love, this is refreshing, for sure!). Since I'm a bit obsessive about such, I'd probably want to start the series with the first book, but have to say that this seemed to stand on its own very well, though maybe some history with some of the characters would have made me less impatient.

About The Author
Dorothy was born in Nottingham, England and came to the U.S. in 1963. She married Julian Cannell and they lived in Peoria, Illinois, from 1965 to 2004. They then moved to Maine where they now reside with their two dogs, Teddy and Watson.

Dorothy became an aspiring writer after taking English 110 at Illinois Central College and being encouraged to write for publication by the class teacher. Seven years later she sold her first short story.

Her first novel, The Thin Woman published in 1984 has been selected as one of the 100 favorite mysteries of the Twentieth Century by the Mystery Book Sellers of America. In 2014, Dorothy received a Lifetime Achievement Award from Malice Domestic. Dorothy has published eighteen novels and a collection of short stories.