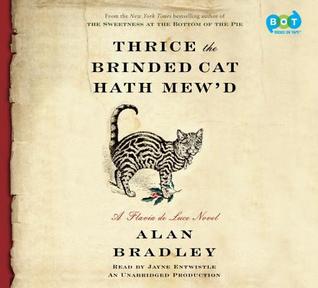 Publisher's Summary:
In spite of being ejected from Miss Bodycote’s Female Academy in Canada, twelve-year-old Flavia de Luce is excited to be sailing home to England. But instead of a joyous homecoming, she is greeted on the docks with unfortunate news: Her father has fallen ill, and a hospital visit will have to wait while he rests. But with Flavia’s blasted sisters and insufferable cousin underfoot, Buckshaw now seems both too empty—and not empty enough. Only too eager to run an errand for the vicar’s wife, Flavia hops on her trusty bicycle, Gladys, to deliver a message to a reclusive wood-carver. Finding the front door ajar, Flavia enters and stumbles upon the poor man’s body hanging upside down on the back of his bedroom door. The only living creature in the house is a feline that shows little interest in the disturbing scene. Curiosity may not kill this cat, but Flavia is energized at the prospect of a new investigation. It’s amazing what the discovery of a corpse can do for one’s spirits. But what awaits Flavia will shake her to the very core.
My Review:
Alan Bradley's Flavia de Luce  books remain one of my favorite series, and I particularly enjoy listening to them as read by Ms. Entwistle. Despite the age of the heroine, these are not children's books, but fully-developed mysteries for the discerning adult. Since the blurb doesn't indicate, I will note that they are set in the 1950s.

In this book, I  found myself not enjoying matters as much as usual, perhaps because Flavia's family situation was both dire and often ignored. It certainly lent and air of gathering doom, and perhaps this wasn't just the best time for me to be wallowing in that. Nonetheless, the mystery is unusual and well put together (though I put a few things together long before Flavia or anyone else, with my advantage of knowing that things are apt to fit together in a book just a little better than they do in real life).

Chemistry didn't play as large a role in this book as in some--Flavia is an accomplished chemist (hard to say, though, if she's as accomplished as she thinks she is). I do love that she is so very unconventional in that way, and gets real pleasure and comfort from turning to her lab.

This is a book where it is hard to discuss my reactions without including spoilers, so I will just say that while it was as well-written as any, I hated the ending, which, alas, I saw coming.

My Recommendation:
Absolutely if you are reading the series, get this book. And if you are not reading the series, get hold of the first one (The Sweetness in the Bottom of the Pie), and start now. Read them in order, from the beginning. And if you like audio books at all, feel free to listen to them, because the recordings are good.  (I notice, looking back at the first one I reviewed, which was Book 4, that I have not always been raving about the books. But as a series...yeah, I think it's fantastic, and despite the challenges this book presents, getting better).

FTC Disclosure: I checked Thrice the Brinded Cat Hath Mew'd out of my library, and received nothing from the writer or publisher for my honest review.  The opinions expressed are my own and those of no one else.  I am disclosing this in accordance with the Federal Trade Commission's 16 CFR, Part 255: "Guides Concerning the Use of Endorsements and Testimonials in Advertising."
Posted by Rebecca M. Douglass at 12:00 AM