October is getting old, and in many places fall is moving in on us. Frosty nights, rain (what's that?), and time for hot cocoa and fires (it's been ridiculously hot here. I can only dream about fires and cocoa. More like fans and iced tea).  So I figured it's time for a photo essay from my trip to the Sierra Nevada back in early September.

This was a novelty for me--I left my guys at home to fend for themselves and went off for a week backpacking with a couple of friends.  I began with the long drive to Bishop in the Owens Valley, and spent a night in the highest campground close to our meeting point.

We started from North Lake, where the aspens were just beginning to turn color. The Sierra crest looked a long way up, so I focused on the small stuff.

A late start and an easy hike, and we were lunching at Lower Lamarck Lake, and looking up to where we'd go the next day.


To my surprise, as we climbed toward Lamarck Col the second day, there were even a few flowers out. Most of them are done by the first week of September, but alpine plants don't waste any possible growing and spreading time.

It was a long climb to the Col, with a lot of false summits and a lot of snack breaks (that's my style of hiking!). Since the Col is nearly 13,000' not much grows up there!
Felt like total triumph when we topped out not long after lunch. Despite our best efforts, we didn't lose the trail on the way up--even though I didn't think there was even supposed to be a trail. What we didn't know was how long it would take to make our way down into Darwin Canyon and along the lakes. There was mostly a route down from the col (as advertised--the surprise was the constructed trial most of the way up the east side), and along the lakes trail alternated with boulder fields.

By late afternoon we were happy to find a flat spot, with water and a place for Zeke to hang his hammock. One nice thing about September, there were no bugs to prevent us enjoying the evening light.
Day Three, and more sun and blue skies. We had to find our way down off the Darwin Bench and onto the John Muir/Pacific Crest Trail, wending our way through meadows and past classic Sierra lakes before we started scrambling down dubious routes through cliffy areas.
After a harrowing descent we stopped beneath an amazing white bark pine for second breakfast. Yes, I eat like a hobbit when hiking: breakfast, second breakfast, elevenses, lunch, afternoon coffee break (no coffee, but food and rest), dinner (with soup, entrée and dessert).
Once we hit the JMT, hiking was much faster, except for the photo stops as we made our way along Evolution Lake. That has to be one of the most beautiful lakes I've seen. The photo doesn't do it justice. Next time, I'm going to spend a night there so I can get morning and evening photos.

After lunch and a nap (oh, did I forget to mention that part of Hobbit life?), we reached our destination at Wanda Lake by mid-afternoon. This was definitely in the alpine, and there was lots of wind. It took a while to find a somewhat sheltered camp with room for 3 people to spread out.


The wind didn't die all night, but I was able to find some protected puddles for the evening photos.
Our 4th day we left Wanda Lake and climbed just a few hundred feet to Muir Pass, where a hut, built in the 1930s, offers shelter for a summit break (and overnight shelter only for those caught in life-threatening storms). The wind seems to blow eternally through the pass, so that I suspect the men who built the hut were glad when the walls grew high enough to offer some shelter.

The day's climb was short, but it was followed by nearly 3000' of downhill, which is no joke for old knees and feet.
When the main descent was done, we were happy to take a break and soak the lower appendages in the icy water of the Kings River. 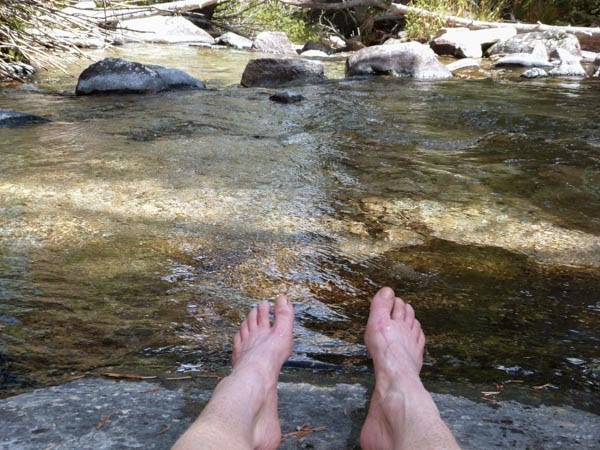 As is the way of mountains, our trail the next day led us on to regain the elevation we lost the previous day. The long climb from the Kings River to Dusy Basin took all day, and took us through a range of terrain.

It had rained in the night, and clouds kept us cool all the way up the climb, twice moving in to shower heavily. We just deployed a tarp, hung out, and let the storms blow by while eating (of course) and telling tales of  adventures past.

It took all day, and we were getting cold and tired before we found camp, and rode out one last shower before the storm blew itself off and we were left with a beautiful evening.

In the morning, the sky was completely clear, the air completely calm, and me near completely frozen. I got up early anyway for the photos. 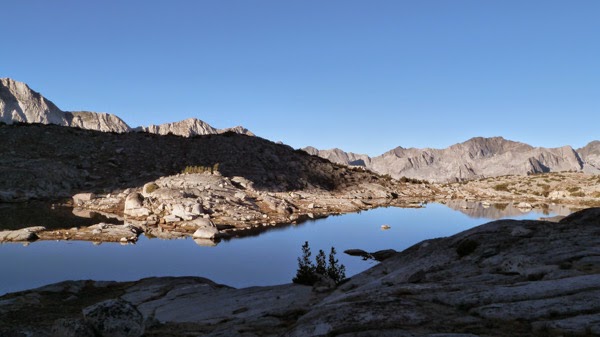 A morning spent exploring the Dusy Basin yielded many treasures, like this lake, where we had intended to camp.
We were also greeted by a marmot, who posed for us for quite a while. 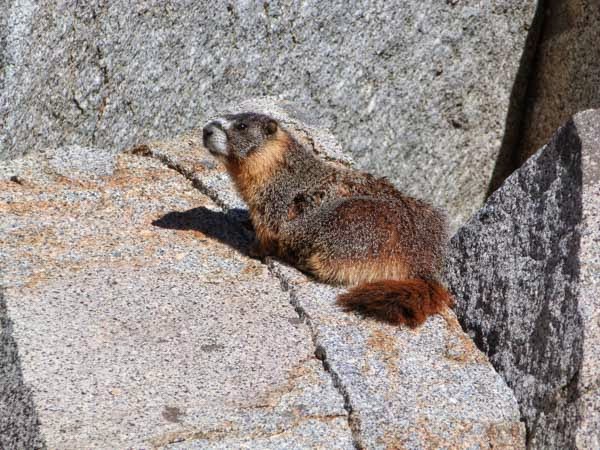 After lunch, we packed up camp and headed on over Bishop Pass, a few miles closer to the cars. I had a meeting to be at the next day, so I enjoyed the evening light, and was up at dawn to hike out.

I always am happy to see the car at the end of a trip--nice to see it's still there, and in one piece! In this case, since I had started early and hiked fast, arriving at 8:45 a.m., the car was also covered with frost I had to scrape off before I could drive! A shower at the nearby pack station, a cup of good coffee from a cafe in Bishop, and I was ready to drive back home. 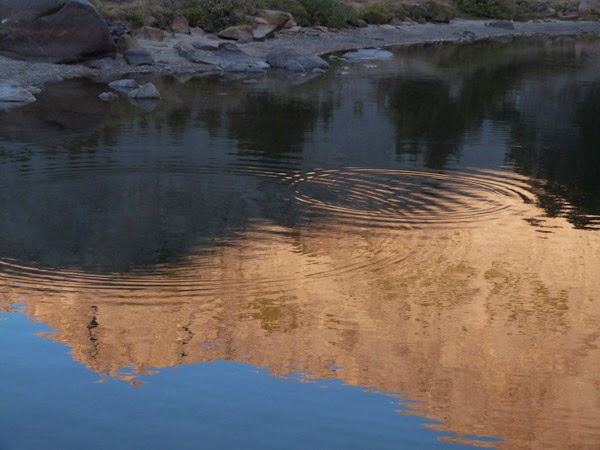 The last of my summer adventures, and a mountain fix to last me until spring!