What gets in the way

I just thought I'd detour here for a moment to talk about what gets between us and writing.  Mostly because right now a nasty headache is making me more than a little disinclined to do actual work.  That includes doing our taxes, writing, or (especially) editing.  And that made me think about all the things that get in the way for writers, especially for writers like me who are doing it as a sideline to two or three other jobs.

For the most part, I've been finding it to be a pretty effective approach to say that I work as a writer from 9-11 every morning (which incidentally works out to 10 hours a week, the same as my part-time job at the library).  The trouble of course comes in two parts, one of which I can control and one I can't.  No control over things like a stinking awful headache or kids who throw up. Just have to do my best to cope when and as they happen, and forgive myself for not being perfect.

Other areas are more fuzzy.  Appointments.  Why not make them some other time?  But it always seems like the only ones available are during the morning hours (probably because everyone else claimed the after-work or after-school times).  Chores.  I try to make them wait until after work (after writing and/or after work at the library).  But what about that commitment to reduce our carbon footprint by hanging the laundry outside?  That means the stuff has to be done in the a.m., or it does no good (I live in a climate that is marginal for drying laundry outdoors, though it is better in winter than summer).  Baking bread.  Gotta do that when I'm home for a longer period.  And those dang taxes.

But here's the thing: none of those things (except maybe appointments and taxes) needs to stop me from working.  I have to get up every 15 minutes or so anyway (I have some issues that make it a good idea not to sit too long).  A five-minute break to work out the bread or ten minutes to hang out the laundry doesn't mean I have to give up.  In fact, a little time to think never hurt anything, when it comes to writing.  It's a little like cheating on your diet.  You don't eat one cookie, decide you've failed at dieting, and go back to swallowing entire boxes of chocolate truffles in one sitting.  Even an appointment isn't a disaster.  I've learned to carry my notebook everywhere, and scribble a page or so while waiting for the doctor or dentist.

Same with writing.  You have a bad day, but get back at it next day.  You spend half an hour of your writing time unclogging the toilet?  Great, you still have 90 minutes.

And as for the headache?  I managed to complete grad school with a headache (my memory says it was pretty much constant.  Given the nature of graduate school, that may well be accurate).  Surely I can write 500 words that way.  They don't even have to be good words.  Anne Lamott said so! 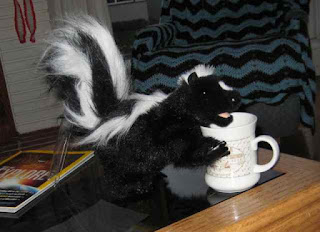 When in doubt, Stinky says: have another cup of coffee!
Posted by Rebecca M. Douglass at 3:05 PM