Walking in the Winds, Part Two

Day Four.
As usual, when we got up at 6:30, we could see that the sun wasn't hitting our camp anytime soon.  It mattered more this morning, as the temps had dropped low enough to leave some frost on the ground.  But we were up and enjoying the morning, or at least preparing to enjoy it once we thawed.  Supplementing our usual morning oatmeal with scrambled eggs helped.

Soon we were warm enough to start moving, anyway.  Our plan for the day involved carrying our packs maybe 3/4 mile down toward Peak Lake, leaving the bulk of our stuff, and dayhiking to Knapsack Col, as close to the crest of the Winds (and the Continental Divide) as our route would allow.

Our only concern was that a portion of the old trail around the far side of the lake had been wiped out by a slide several years ago (the newer section still shows up as a lighter triangle of scree in the center of the photo below).  In the event, it proved passable, with only a little scrambling. 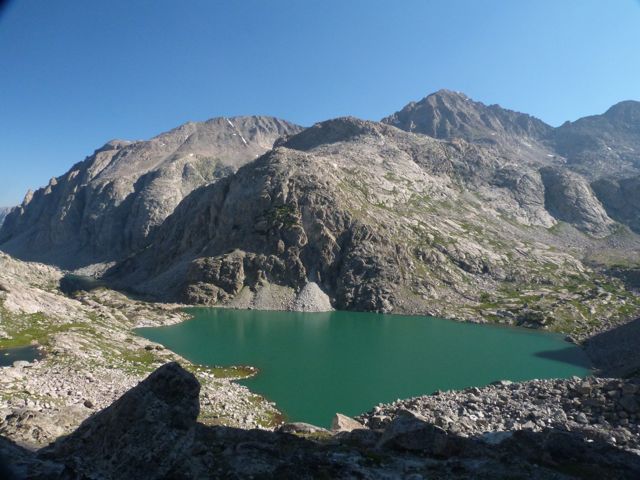 Soon we were around the lake and climbing toward the Col (not quite visible below, on the left edge of the skyline).  The water we were following is the source of the Green River (which joins with the Colorado in Canyonlands, near Moab, UT).  It all starts with the glacier at the top of the picture. 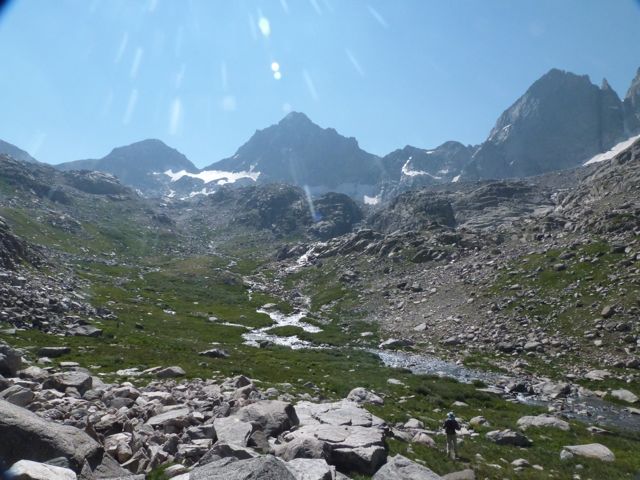 Looking back the other way, we have topped a ledge and can no longer see the lake, but only the peaks on the far side of a couple of canyons. 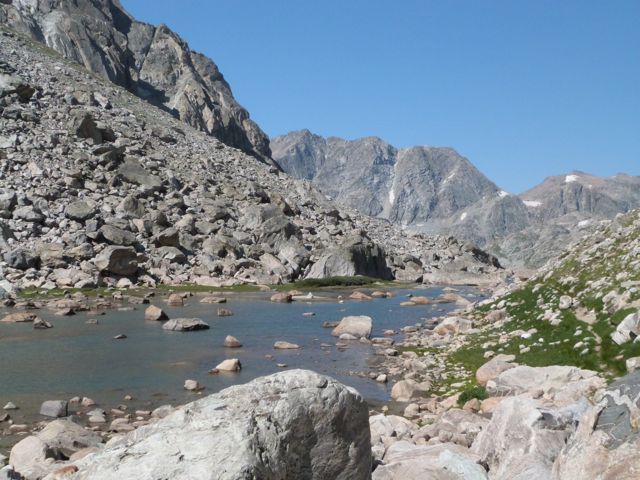 Wildflowers were a treat up there.  Not a lot of varieties, but patches of great abundance.  Lots of Indian Paintbrush, one of my favorites. 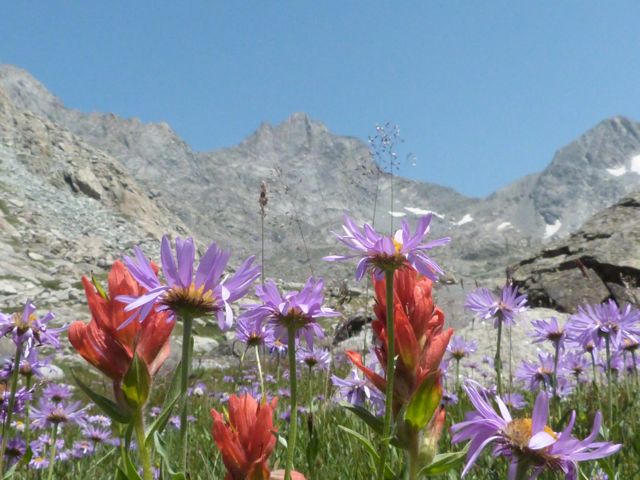 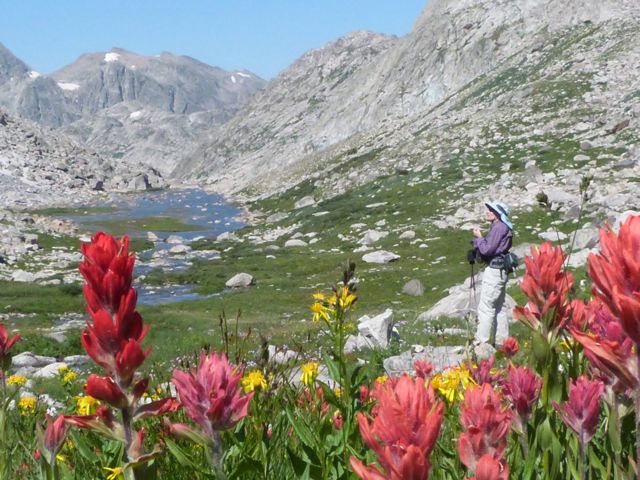 From the top of the Col, we could see all the way back down to Peak Lake, which looks a lot farther away than the two miles it was advertised to be.  Felt farther, too. 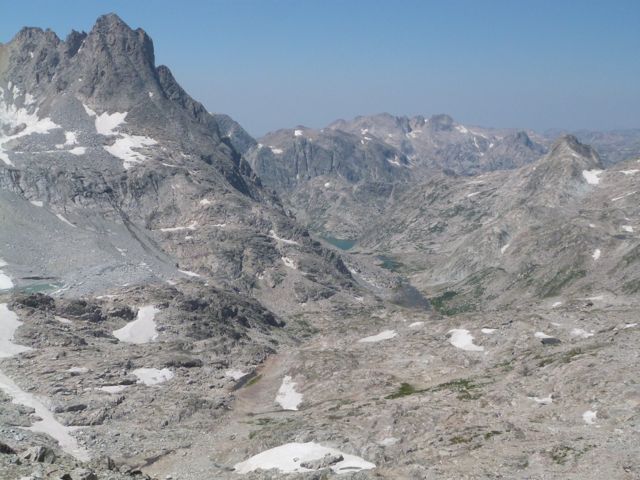 The wind was howling through the col, forcing us to shelter behind a boulder while we downed our lunch.  From our shelter, we could see into the top of the Titcomb Basin, a mecca for climbers (not sure just which things they climb, though, and we didn't see any). 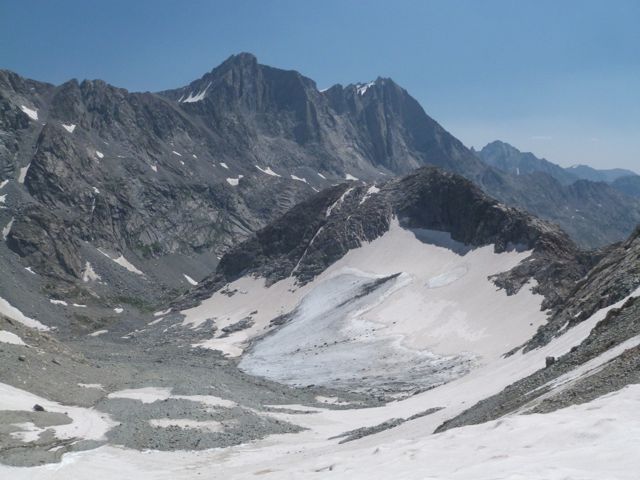 Then it was a looooong climb back down (about 1800') to the lake, and back up to pick up our packs and continue north on the "no longer maintained" Cube Rock Pass trail.  We were to find that the warnings that it isn't maintained, and is not passable for stock, were spot on.  Partway down the boulder-strewn gully, we lost the trail under a huge rock slide.  Our boys found a good way through, my spouse and I followed some cairns and found the bad way.  After a half hour of picking our way over, under and around car- to house-sized boulders, we finally came out the other side, and my legs, at least, had had about enough.


Trail runs somewhere down through those boulders, or once did. 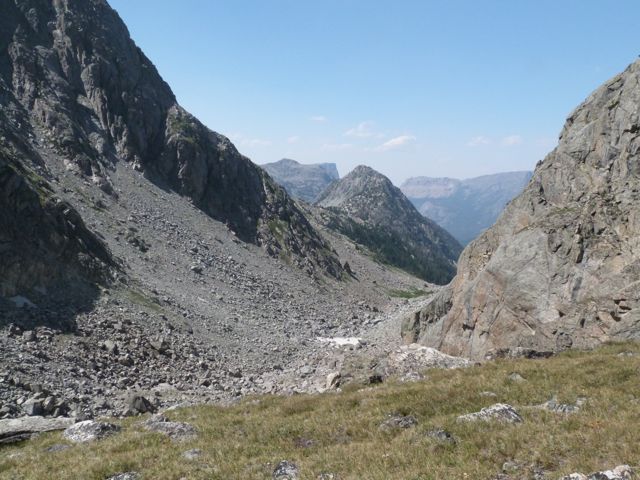 We still had a couple of miles and a few hundred feet to go to camp, though--nearly an hour's worth, and it felt longer.  I was very happy when we topped out Vista Pass and found a small pond, and some nearby campsites.  Soon we had our happy home, complete with easy chairs. 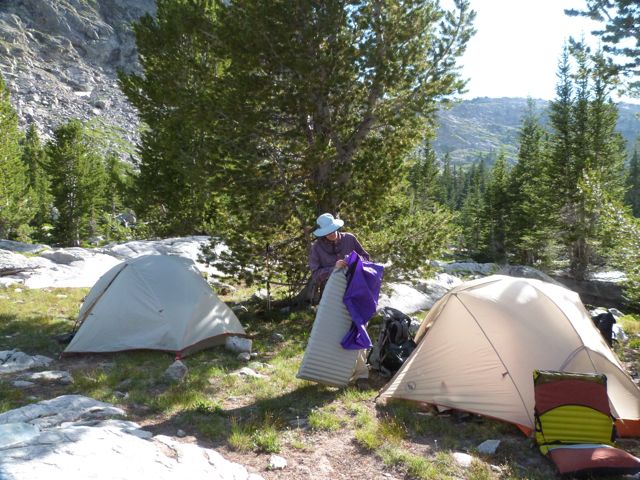 And, even without clouds to make a spectacular sky, the evening brought us yet another light show. 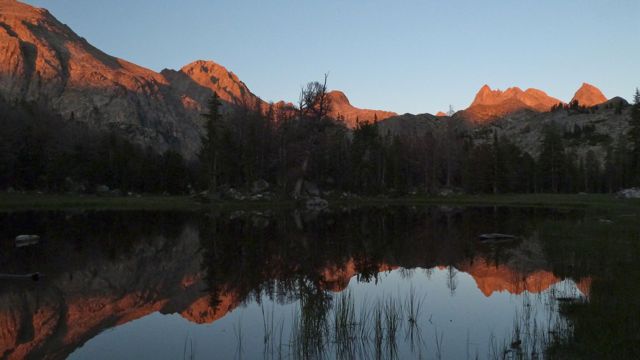 Day Five.
Morning was easier than most in some ways--like getting sun before we were through breakfast--though harder due to muscles strained by the climbing (and especially the descending) the day before.  Nonetheless, we were soon dropping into the next drainage, where a random collection of logs and boulders allowed us to cross the stream dry-shod.  There was only one bridge on this whole trip--and, at this season, only one needed. Most of our crossings were simple log-walks or rock-hops. 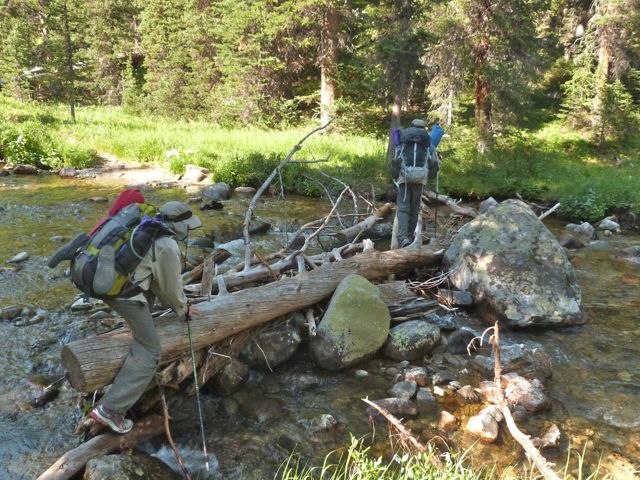 Our route for the day put us on another long climb, up from Three Forks Park to an unnamed pass near Lozier Lakes.  Fortunately, we'd started early enough to beat the heat (which wasn't bad  anyway, as the wind came up and cooled things all too well).  Also, the trail came with a snack bar partway up.  Nothing like fresh huckleberries! 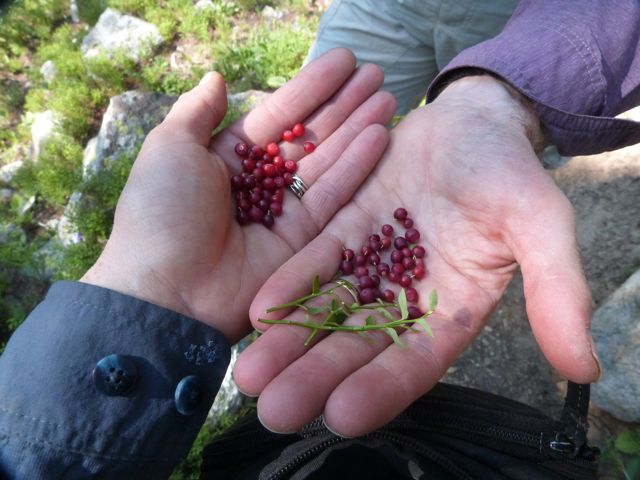 After what felt like a long climb, we came to Clark Lake, from which we could see the rest of our climb, up the end of the valley. 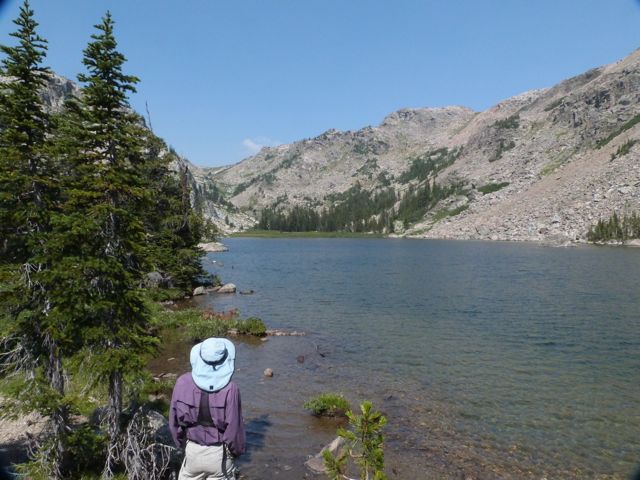 The upper slopes of the pass proved to be a flower garden, however, once again demonstrating that even if my husband doesn't bring flowers to me, he does at least help me to go to the flowers. 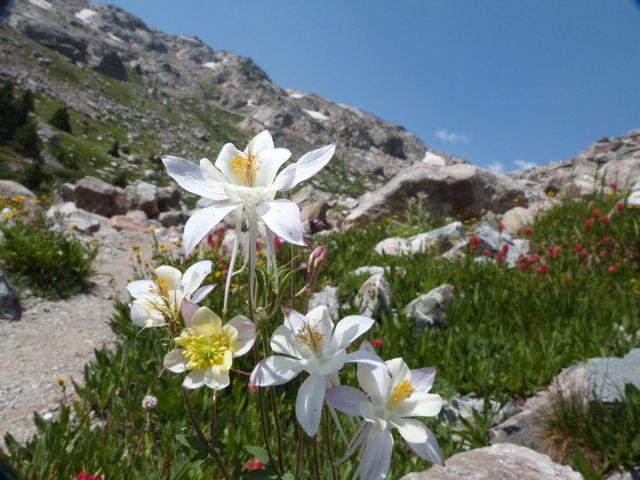 Our plan had been to camp atop the pass, to make for a quick and easy evening hike up into the area around Hidden and Thompson Lakes.  But the wind, which had been a nice, bug-removing breeze at Clark Lake, was a howling gale on the pass, and we dropped a few hundred feet to find a campsite by a lake just below tree line.

That meant that the after-dinner hike my husband and I took was longer, harder and less thorough than we'd have liked, but it did also mean that we were able to cook and eat our meals without the wind howling through us, a reasonable trade-off.  And we did manage to climb to a vantage point over Thompson Lakes in the evening light.  Definitely an area I'd be willing to revisit, and visit more thoroughly. 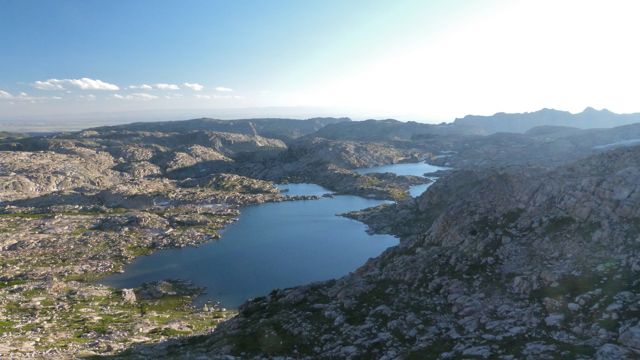 In the other direction, the peaks now farther east of us were nicely lit by the sinking sun.  I could no longer pick out Knapsack Col up there, and it may be out of the picture to the right. 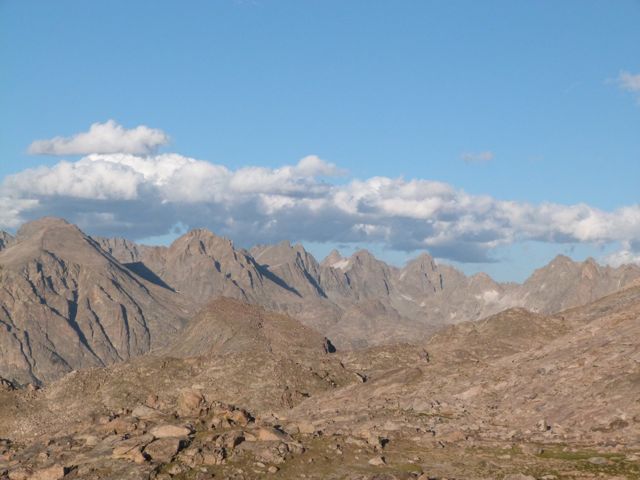 We made it back to camp just before dark, in time for everyone to hit the sack. 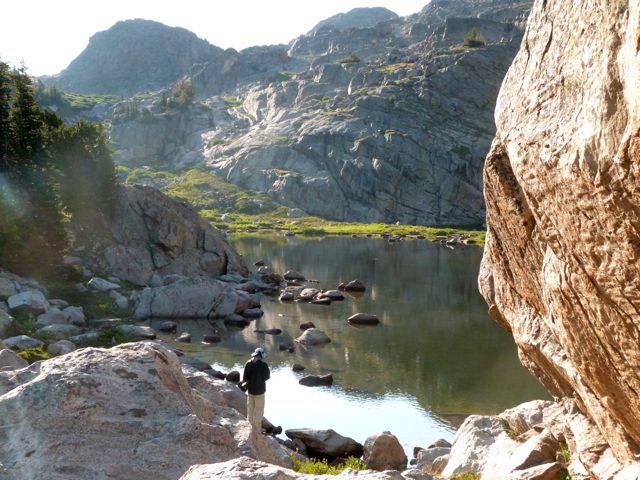 Soon enough, though, it was back to the trail.  We had a fairly long hike in front of us, six or so miles, depending on where we'd find a camp.  We started with some ups and downs across to Lower  Lozier Lake (pictured below and behind my husband) and up to Upper Lozier (at the top of the rise beyond and to the right of the lake).  After that, we knew we'd be in for another knee-pounder--something like 1200' down to New Fork Park. 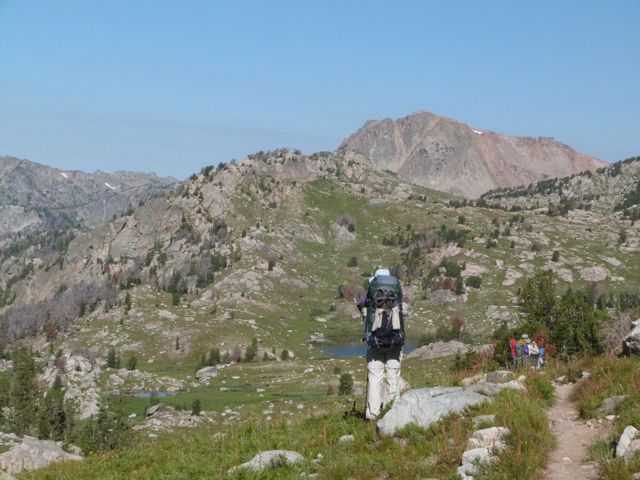 Upper Lozier is a premier camping spot, and we could see why.  We could also see that, like Peak Lake, several parties had, in fact, camped there.  We had no regrets for having gone farther from the trail and sacrificed a bit of the view for solitude. 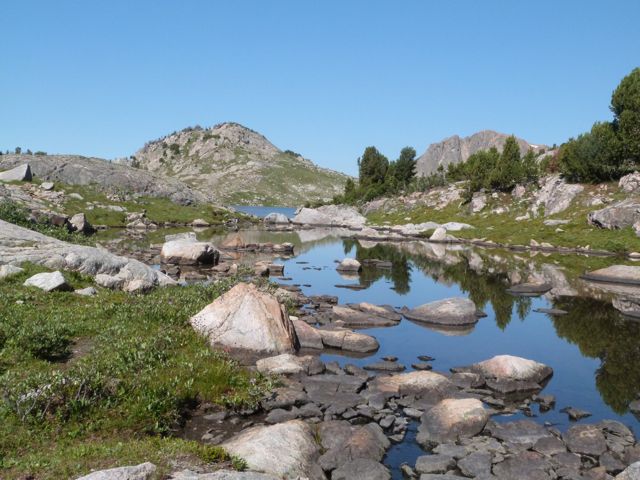 Finally, we reached the point where the high peaks would drop behind and not be seen the rest of the trip.  For consolation, we could look down into New Fork Canyon, where the impressive walls would console us for our sore knees once we were down. 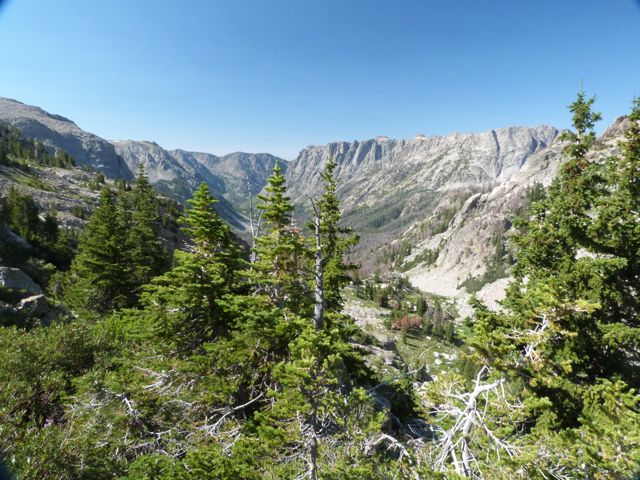 In fact, we made it down in time for a late lunch, at which we ate the last of our crackers and most of the rest of the lunch food, committing ourselves to hiking 7+ miles out to the car before lunch the next day.  Lured by talk of burgers and shakes, the boys were easily convinced to get up early and get it done. 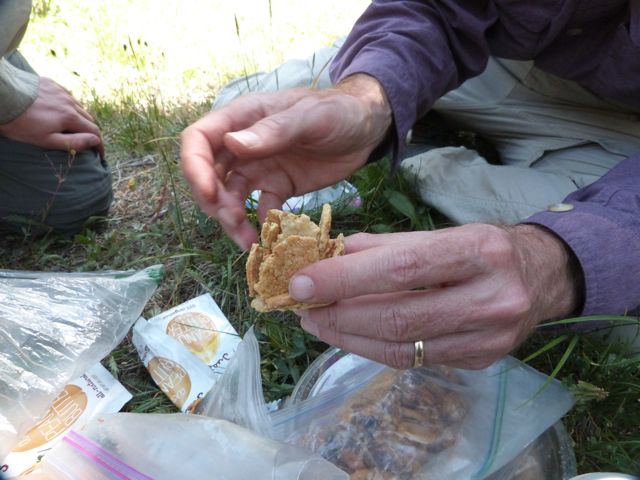 Apparently there was at least one forest fire burning off to the west, causing a lot of haze. As the sun dropped behind the canyon walls--not long after 6 p.m., due to the height of the walls and narrowness of the canyon--we could see the effects of the smoke in the air. 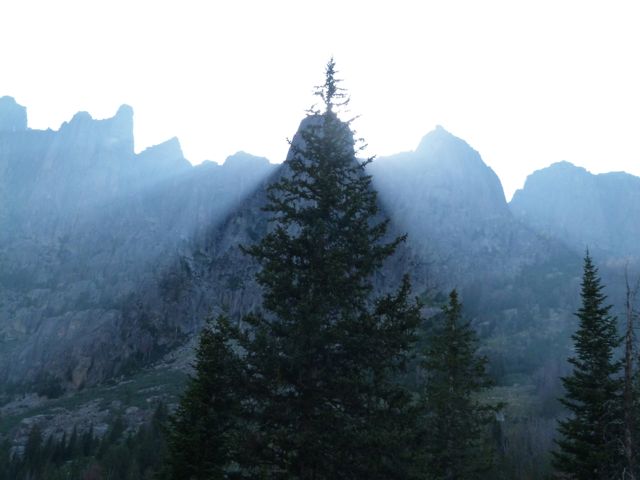 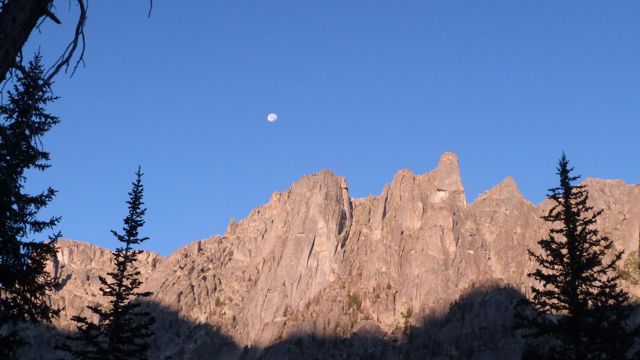 We made our earliest start of the trip, and were on the trail long before the sun hit the Park.  Hard to photograph, but pretty to walk through the meadows while the sun crept down the walls. 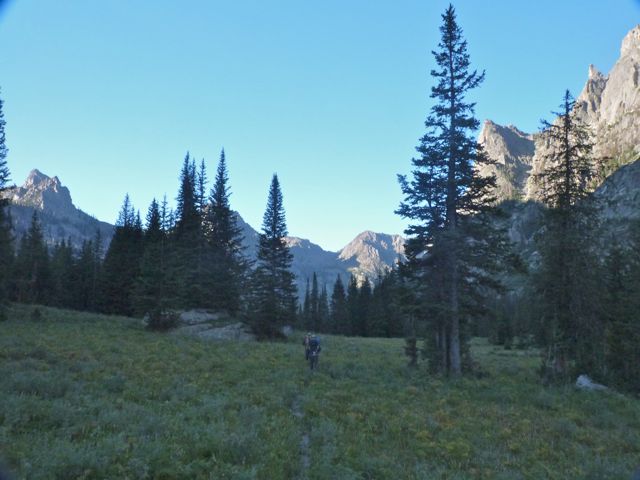 We didn't stop for a lot of photos on the way out.  The spectacular scenery was behind us, the burgers (and shakes!) ahead.  But it was worth a pause when rounding a corner brought New Fork Lakes into view at last, however distant.  The forest in foreground is partly burned, thus the many standing dead trees. 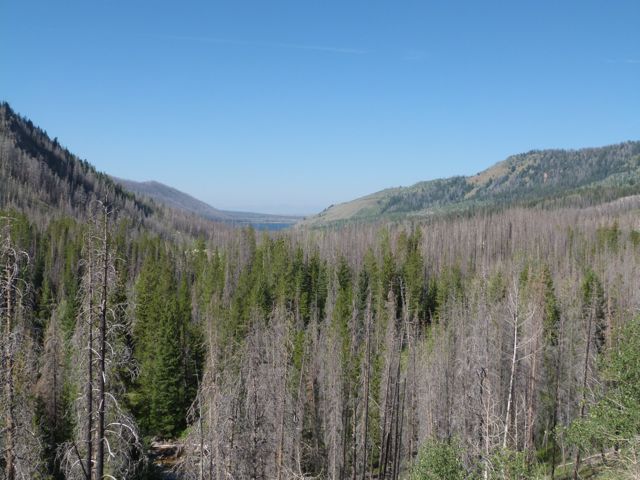 Only a few miles to go, passing beneath an arch of fallen tree.  That's me, burning up the trail in hopes of some fresh food and a shower (as it happened, I had to settle for a swim in the lake, but that did the job).  Another great trip--one of our best.  Not a lot of writing that week, but plenty of soul-healing beauty and peace.  Oh--and a glorious salad to go with that burger.  Fresh fruits and veggies never taste so good as after a week on the trail! 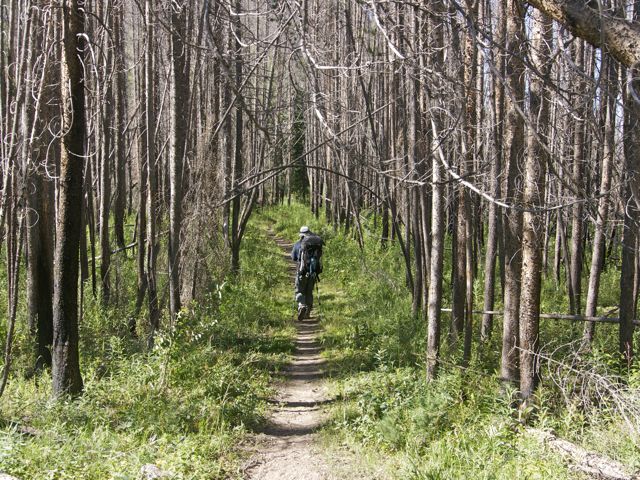