Photo Friday: Trekking in Nepal, Part I: Lukla to Namche

Going over my photos, it's hard to see how I can do this trip report with anything like a reasonable number of photos, unless I do one day at a time (and even then it could be hard). For that matter, I could do a whole post on flying into Lukla! Here it is, though.

Background: My second son (age 22) and I signed onto a group tour with Kamzang Journeys, a 21-day trek in the Everest region, with several days in Kathmandu on either end. Let me say right up front: Kim Bannister, Lhapa Dorji Sherpa, and the whole Kamzang crew were amazing, and it was a fantastic trip. It probably didn't hurt that they were all so excited to be trekking again, after a two-year hiatus due to COVID. Nepal has focused vaccination efforts on the main tourist areas, making the trek feel as safe as anywhere in that regard (honestly, the vaccination rate in the Khumbu--the Everest region--is far better than in the county where I live). We also found that many if not most of the people spoke English, some very well. It appears to be taught now in all the schools. With so many different languages spoken in Nepal, it makes sense to use English as the common tongue, since it works on most tourists, too.

The real trip began with our 4:45 a.m. departure to the airport. All flights in and out of Lukla are in the mornings, pretty much, because the weather tends to deteriorate through the day. This did mean that we were in the mountains in time for breakfast. Lukla is at about 9300' and our first day would drop to the Dudh Koshi river then climb back to Monjo at a similar altitude, so we weren't too worried about the elevation--yet.


We enjoyed further excitement as we dropped to river level and began to cross bridges, some fixed, more of them swing bridges--and yes, the dzokios, yaks, and donkeys use those same bridges. They always have the right-of-way. 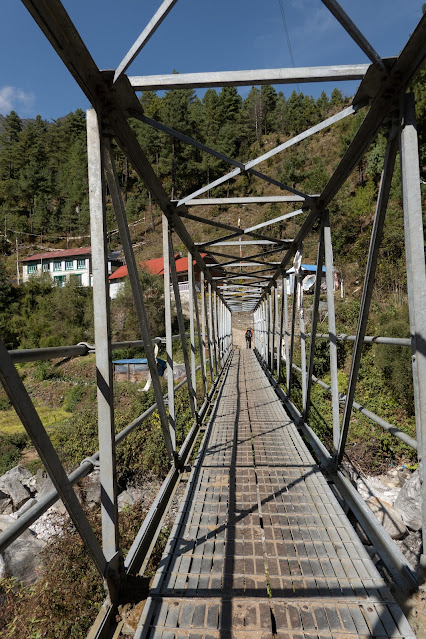 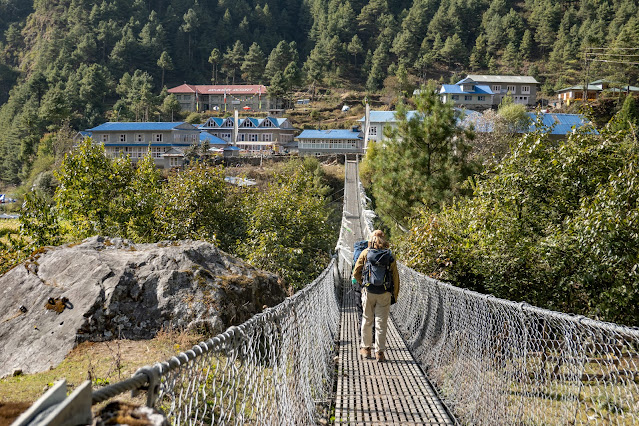 We got even more excited about our first glimpses of snow-and-ice-covered peaks. 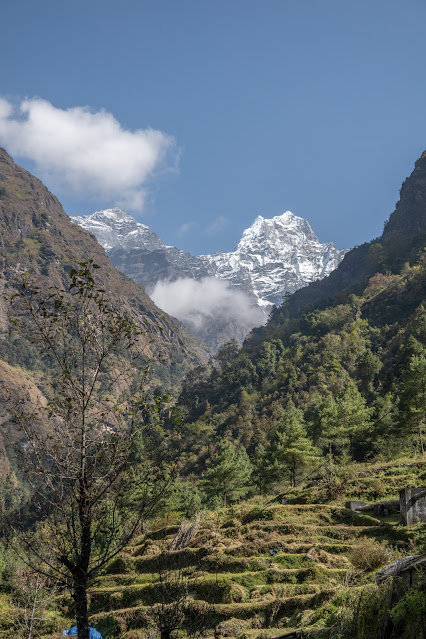 The second day, leaving Monjo for Namche (11,363') meant a big climb. We also entered Sagarmatha National Park almost at once, which caused some thinning of the number of villages and lodges, but not as much as you would expect from a US park model--this park acknowledges and accepts the people who live there, and were there before the park. 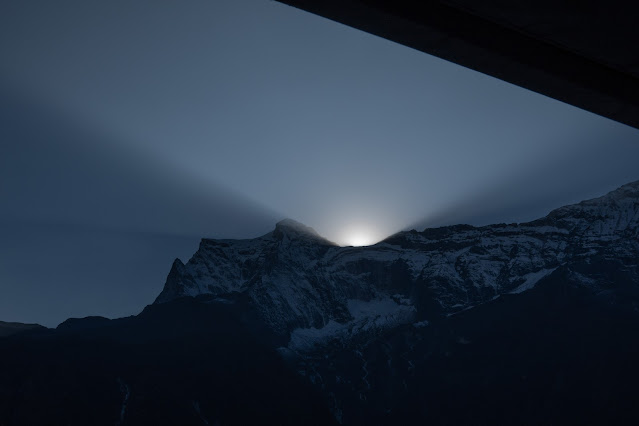 Two days of hiking, to be followed by a day of rest and altitude adjustment. I'll pick up the story next week!