Merry Xmas, and another photo report!

In our last, we had arrived in Namche (often called Namche Bazaar, but the locals have moved away from that name) and found our sunset blocked by the fog. Fortunately, when my son and I dragged ourselves out of bed at 5:30 to check the sunrise, we were better rewarded.

With schools centralized in the larger towns, many of the children have to board during the school term. The Namche boarding house was right below our hotel, and as we prepared to leave the children were getting ready for school.

All students are taught English from a young age, it being the lingua franca  of Nepal, as it were. We met several fairly young children who spoke English very well. The Namche school, and several others in the Khumbu (the Everest region), was founded by Sir Edmond Hillary.

Leaving town, we headed pretty much straight on up the ridge, passing a chorten (a sort of a shrine) on the ridge. 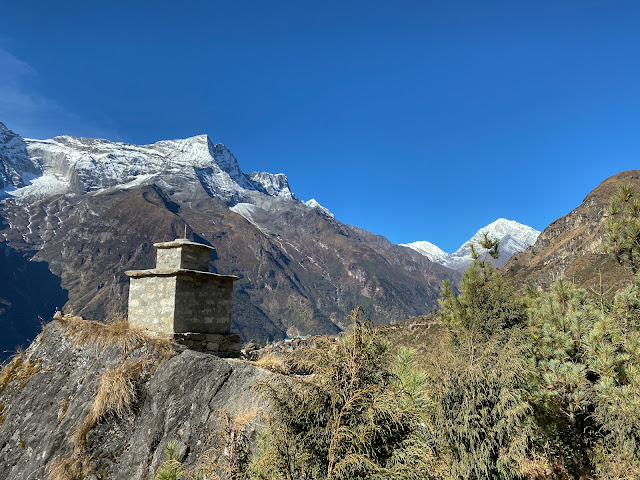 Nearly to the top, we stopped to learn more about Sagharmatha Next, which is working to create more sustainable tourism in the Khumbu. The buildings being  constructed on the hill above Namche will house art studios and artists, local and international, who will work to create art from the waste stream. In addition, the organization is working with the Park on a waste management plan, and will be rolling out "Carry Me Back," a new initiative to enlist trekkers and guides to help carry the waste back to Lukla for removal.

A short way farther up, and we were atop the ridge with view of Everest (the left-most peak), and Yaks to be dodged. They are adorable, but can be cranky, and those horns are nasty! 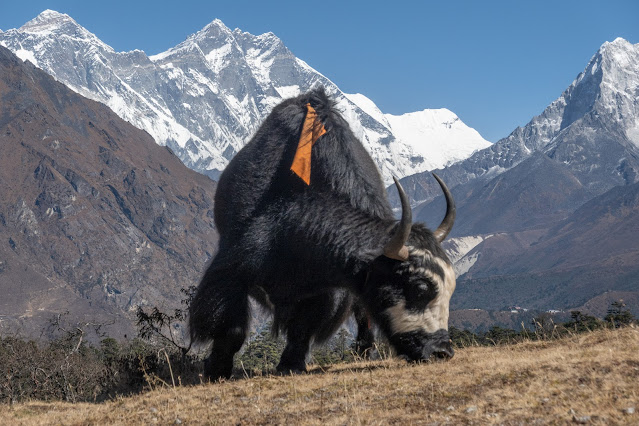 However fierce yaks may be, a joyous sight for us was seeing our yaks arrive with our luggage.

Once we'd had a late lunch, we climbed the hill behind town to the Hillary Memorial and a stunning viewpoint.


At the viewpoint, with the fog moving in, we experienced the amazing Brocken Spectre, which can be seen only when you are above a cloud with the sun behind you (typically from a mountaintop). It's hard to see here, but inside the rainbow halo is my shadow. It looks large because the shadow is actually on the clouds/mist just below me, not on the ground far below. The fog moved the rest of the way in as we climbed a bit more to the Hillary Memorial, three chortens dedicated to Sir Edmond Hillary, his wife Louisa, and daughter Belinda. The latter two died in a plane crash during the construction of a hospital in the area, sponsored by the family.

Next: farther into the Khumbu as we head for Ama Dablam base camp.

For now, happy holidays of all sorts to you, and I'll see you next week, when I've recovered from my own holiday celebrations.

Watch this space--the blog will be moving to our new home after the new year! That one's not quite ready, so I'm not sharing the URL yet, but just putting you on notice!