Middle Grade Review: Fizz and Peppers at the Bottom of the World 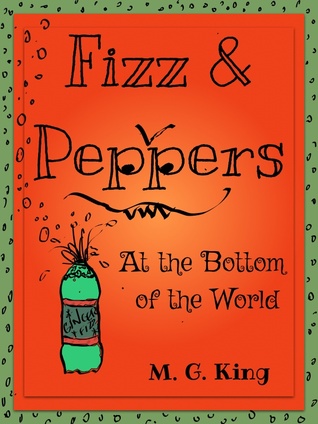 Summary:
Colin Colbeck is having a very bad day. He had to miss the baseball game to make cupcakes, and now those cupcakes have been stolen by trolls. So has his grandmother, and his little brother. He's forced to team up with his mortal enemy, ex-best-friend Pepper to rescue them and save the world from trolls. Because all it took to wake them up and start trouble was one careless drop of fizzy soda pop in just the wrong place...

Review:
What a galloping mad romp! I picked the book up expecting goofiness, and I got it. But I also got a tightly-written adventure that adheres to its own rules, however crazy they may be. Colin is a wonderful hero, in part because he's no hero at all. He's a lame, tame taco, just like Pepper says. So he's never surprised when his plans go astray, just terribly disappointed in himself and unhappy at losing Grand, then his little brother Sid, and then maybe the whole town. Yet every time he falls down (or is squished by a troll or attacked by a giant poisonous centipede), he manages to get up and come up with a new plan. I love his perseverance and occasional insights (he does eventually figure out why Pepper is so contrary to everyone).

I also loved the adventure, especially the slightly goofy side to it all. The trolls are so beautifully trollish--a bit stupid, but most of them also cruel and heartless (well, how can something that's basically stone have a soft heart?). This very well-written and impeccably edited romp through the troll lands that may be underneath all our homes is a joy to read, and I didn't want to put it down.

Recommendation:
For kids who like fantasy and humor and unlikely heroes. Also for adults who like the same. I'm pretty sure Gorg the Troll would like it, too, though he would be appalled at the bad behavior of these trolls.

Full Disclosure: I don't know just how I got my copy of Fizz and Peppers at the Bottom of the World, but I know I received nothing from the writer or publisher in exchange for my honest review.  The opinions expressed are my own and those of no one else.  I am disclosing this in accordance with the Federal Trade Commission's 16 CFR, Part 255: "Guides Concerning the Use of Endorsements and Testimonials in Advertising."
Rebecca M. Douglass at 12:30 AM
Share