Friday Flash: All That Glitters

Our Wendig Challenge this week involved a wonderful mashed-up idiom generator. Our assignment: to get a new idiom use it in a story. I generated quite a few--it was fun--and was tempted by some, like "Faint heart get out of the kitchen," but stuck with the first one I drew:

All That Glitters Speaks Louder Than Words


Millicent was having trouble with the books. Librarian to a very unusual library indeed, and brought up by dragons who trained her from infancy for the job, she knew it was possible. But she didn’t have much trouble as a rule. Millicent could even keep the shelf of spelled books in order, mostly. They occasionally devoured some young wizard who believed the lies he told himself about his power, but they obeyed her.

It wasn’t those books. It was the business section. These books were largely written by elves, who contrary to popular mythology were more interested in how the economy worked than in talking to trees.

The mistake may have been shelving them next to the books on deep magic.

The books had begun to be…difficult.

The first complaint had come from a faun, who claimed that one of the books had tried to pick his pocket. When it found nothing there but a pen and a handkerchief, it snapped at him. He was very indignant.

Millicent’s initial assumption was that the faun had been trying out something stronger than drink. If there was one set of books in her library that gave no trouble, it was the business section. Hardly anyone even looked at them, since aside from the elves who wrote them, few of the Library’s patrons cared about the management of money. Most of them just went out and found more when they ran short. By “finding more,” Mil knew, they meant “pillaged and plundered for more,” unless they were wizards, who tried to make it out of base metals. Usually with some kind of grant to live on while they conducted their research. So the financial books didn’t see a lot of use.

The next complaint was from a dwarf, who said that she’d been walking past the section when one of the books leapt out and tried to force her to read it. Millicent thought that might indicate it was time for a change of shelves for the books, but it would take time to work out a new place for them.

Meanwhile, three more patrons complained of having their pockets picked, and finally Millicent was forced to look more closely. She took the precaution of emptying her pockets before approaching the shelf. No point in putting temptation in a book’s path.

She walked down the long row of shelves, letting the books know she was there. Halfway down she felt a book calling to her, and reached to pull it off the shelf. Her eye was drawn to the page. It was blank. Swearing under her breath—it was, after all, a library, so loud voices were discouraged—Millicent flipped through the rest of the pages. All blank. The words had gone elsewhere. She checked the title. "Get Rich."

"This will not do!" Millicent kept her voice low, but no less forceful. Where would the words from a book on making money go?

Where the money was, of course.

Millicent strode briskly between rows of books to the section on alchemy. A few words leaked out of the corner of one of the books. She commanded them to return to their books, and watched as they trickled slowly down the shelf. Not enough of them to account for it all. She walked on down past more shelves of books, looking for the tell-tale line of letters.

There. Headed for the…uh-oh. Millicent was dragon-raised and had spent time in the slums of Erlintown, so there wasn’t much left to scare her. This did. They were headed for the Spelled Books.

“Oh, no you don’t!” She was by gum the librarian, and no words about money were going to disobey her. The Spelled Books were dangerous, and the gods alone knew what would happen if they learned about making money.

The works had nearly reached the books. Millicent looked around frantically until she spotted a dragon. One of the Elders. There’d be trouble over this, but she didn’t have time to explain. She made a dive for the dragon’s belt purse, cut it loose with a single slash of the paper knife she always wore at her belt, and dashed back to the line of words.

The bag opened easily. Dragons kept their money-bags well-oiled for easy access, because they liked to reach in often. Not to spend the money—no one charged a dragon for much of anything—but to feel the gold coins. Millicent upended the bag on the floor a little way away from the words, and watched with satisfaction as they abandoned their quest and swarmed over the gold.

She turned to fetch a broom. It would be easiest to simply sweep it all—words and gold alike—into a dust pan and sort it out after.

The moment her back was turned, the dragon swooped across the room, his wing knocking the librarian off her feet. He landed next to the heap of gold and words, and a single exhalation left the gold cleared of the crawling words, which smoked a little and vanished.

One by one he picked up the gold pieces, polished each one, and dropped it into his purse. Only when all were restored did he turn to glare at Millicent.

The librarian glared back. “Those words belonged in some of the books.”

The dragon gave an elaborate wing-shrug that threatened to topple a shelf of books on animated herbs. “They wouldn’t stay. They will always seek money.”

“I could make them stay.”

“Now they know.” The dragon paused so long that Millicent thought he wouldn’t say what the words now knew. “All that glitters speaks louder than words.”

“What?”
“It’s an old dragon saying. ‘All that glitters speaks louder than words.’ Meaning much as we like words, a dragon will take gold every time.” He wrapped the bag of gold coins tightly in his fist.

“Never forget that, if you value your library.” 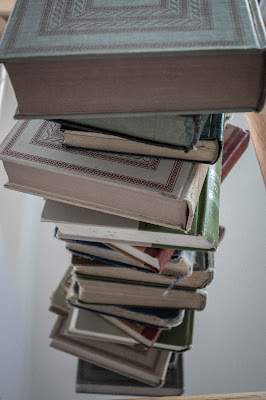